Objective: To investigate the expression of glioma-associated oncogene homolog 1(Gli-1) in colon cancer and its association with clinicopathological parameters and postoperative liver metastasis.

Methods: Expression of Gli-1 was detected by immunohistochemistry in paraffin-embedded specimens of 96 cases of colon cancer. Relationship between Gli-1 expression and clinicopathological parameters, postoperative liver metastasis were analyzed.

The hedgehog (Hh) signaling pathway is known to play essential roles in multiple aspects of embryonic development. Dysregulation in Hh signaling has been implicated in the pathogenesis of a variety of human tumors including tumors of skin, cerebellum, muscle, lung, digestive tract, pancreas and prostate [4-9]. Furthermore, the activation of the Hh signaling pathway is associated with the malignancy of tumors and their progression to metastatic stages [10,11]. Glioma-associated oncogene homolog 1(Gli-1) protein is a component in Hh signaling pathway, which functions as an activator of transcription [12, 13]. Cyclin D2 and FOXM1 have been identified as the downstream target genes of Gli-1 in basal cell carcinomas [14, 15]. Accumulating evidences have shown that Gli-1 is involved in tumor progression [16, 17].

The aim of the present study is to explore the potential role of Gli-1 in colon cancer development. For this purpose, Gli-1 protein expression was detected in colon cancer and normal colon tissues by immunohistochemistry using tissue microarray. In addition, the correlation of Gli-1 protein expression with the clinicopathological data and prognostic variables was analyzed.

Tissue samples were collected from patients with colon cancer who underwent surgical operation in the Second Hospital of Shandong University from July 2002 to December 2007. Formalin-fixed and paraffin-embedded tissue specimens from 96 patients with colon cancer were included. All patients received no chemotherapy and/or other therapies before surgical operation. Table 1 presents the clinicopathological data of the 96 patients. All hematoxylin and eosin (H&E)-stained slides for each patient were reviewed by two pathologists. Clinical and pathological classification and staging were determined according to the American Joint Committee on Cancer criteria [18]. The study protocol was approved by the ethics committee of Shandong University. Written informed consent was obtained from each participant before data collection.

For each H&E-stained slide, two representative areas were selected and the corresponding spots were marked on the surface of the paraffin block. Using a tissue microarray punching instrument, the selected areas were punched out and were placed into the recipient block side by side. Each tissue core was 2 mm in diameter and was assigned with a unique tissue microarray location number that was linked to a database containing other clinicopathological data.

The expression of Gli-1 was detected by streptavidin-peroxidase-biotin (SP) immunohistochemical method. In brief, paraffin-embedded specimens were cut into 4μm sections and baked at 60°C for 60 min. The sections were deparaffinized with xylenes and rehydrated. Then sections were submerged into EDTA antigenic retrieval buffer in a pressure cooker for 10 minutes and then cooled at room temperature for 20 minutes. The sections were treated with 3% hydrogen peroxide in methanol to quench the endogenous peroxidase activity, followed by incubation with normal serum to block nonspecific binding. The sections were incubated with Gli-1 monoclonal antibody (1:50; Santa Cruz; sc-20687, CA) overnight at 4°C. After washing, the tissue sections were incubated with biotinylated secondary antibody (Maixin Biotechnology Company, Fuzhou, China) for 1h at room temperature, followed by incubation with streptavidin-horseradish peroxidase for 20 minutes. After washing with PBS, diaminobenzidine (DAB) was added for visualization. The sections were counterstained with haematoxylin. For negative controls, the anti-Gli-1 antibody was replaced with PBS.

The stained slides were reviewed and scored independently by two observers blinded to the patients' information. Gli-1 protein expression was evaluated using the Immuno-Reactive-Score (IRS) system (combining positive cell ratio and staining intensity) as suggested by Remmele and Stegner [19]. Staining intensity was graded according to the following criteria: 0 (-, no staining); 1 (+, weak staining= light yellow); 2 (++, moderate staining = yellow brown) and 3 (+++, strong staining = brown). IRS is the product of staining intensity and the percentage of positively stained cells (graded between 0 and 4, being 1 = <25%, 2 = 25%-50%; 3 = 51%-75%, and 4 = >75%, respectively). Cases with discrepancies in IRS score were discussed together with other pathologists until consensus was reached.

Gli-1 protein expression and localization was studied on a large TMA including normal (n = 26) and tumorous colon tissues (n = 96). Gli-1 staining was detectable in both the cytoplasm and the nucleus of benign and malignant colon epithelial cells. However, nuclear expression was more abundant, and as Gli-1 is a transcription factor, nuclear Gli-1 expression was scored for subsequent data analyses and correlation studies. In the nucleus of normal colon tissues (Figure 1A), Gli-1 protein expression was less abundant (median IRS =4) than in the nucleus of colon cancer cells (median IRS = 8) (P = 0.037). In the cells of the colon cancer, Gli-1 expression was present in different intensities and different cell distributions. Following the staging criteria of stain intensity, no cases were identified as completely negative, 10 cases (10.4%) were identified as “+” (Figure 1B), 22 cases (23.0%) were identified as “++” (Figure 1C), and 64 cases (66.7%) were identified as “+++” (Figure 1D). We evaluated Gli-1 protein expression in colon cancer cells by determining the IRS, with scores of 1, 2, 3, 4, 6, 8, 9 or 12. The optimal cutoff value for high and low expression level was identified: an IRS score of ≥ 6 was used to define tumors with high expression of Gli-1, and an IRS score of <6 was used to indicate low expression. The high level (IRS≧6), low level (IRS<6) expression of Gli-1 in colon cancer was observed in 76 cases (79.2%) and 20 cases (20.8%), respectively. 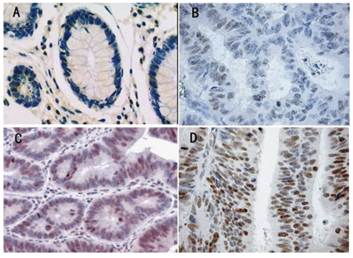 There was no significant correlation between the expression level of Gli-1 and biological factors such as patients' age (P=0.402), gender (P=0.354), tumor size (P = 0.086), Tumor grade (P = 0.958). In contrast, statistical analyses indicated that Gli-1 expression was positively related to lymph node status, T stages and the correlation was statistically significant (P= 0.022/0.030, respectively). The results of these analyses are summarized in Table 1. 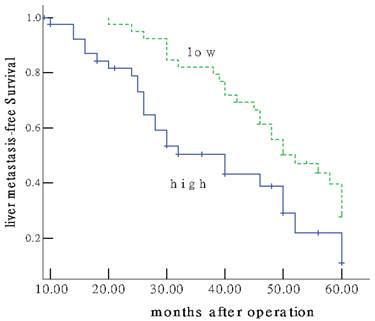 Gli-1, which is located on chromosome 12q13.2-q13.3, was initially identified as an amplified gene in a human malignant glioma [12]. Gli-1 and the other two members of the Gli family, namely, Gli-2 and Gli3, are the nuclear mediators of the Shh signaling pathway that plays an essential role in the regulation of early development of central nervous system [20]. For example, the Shh-Gli-1 pathway is required for the differentiation of the floor cell and ventral neurons in the neural tube, granule cell precursor proliferation in the cerebellum, and dorsal brain growth [21-23]. Besides its role in normal development, Shh-Gli-1 pathway has been implicated in tumorigenesis, [20, 24-26]. There has been evidence showing that dysregulation of Shh-Gli-1 pathway is associated with the development of oesophageal squamous cell carcinomas, basal cell carcinomas and brain tumors [17,27,28].

In the present study, we examined the Gli-1 expression in paraffin-embedded tumor samples using the IHC method with the monoclonal antibody. Our results showed that Gli-1 is in the cytoplasm and nucleus of cells as the product leaflet of the antibody indicates. Previous studies by Yoshikawa et al [29] and Mori et al [17] have demonstrated that nuclear staining pattern of Gli-1 in cancer cells is associated with early recurrence and poor prognosis. Therefore, in the present study, the evaluation of Gli-1 expression by the Immuno-Reactive-Score (IRS) system was based on the nuclear staining.

In the present study, high Gli-1 expression (IRS≥6) in the colon cancer tissues was detected in 76% of the patients. Furthermore, Gli-1 expression level is correlated with lymph node metastasis (P = 0.042) and T status (P = 0.030), which suggests that Gli-1 may have some correlation with worse biological behavior and clinical aggressiveness. Our findings are consistent with the results of a previous study by Xu M et al [33].

This study was supported by Independent Innovation Foundation of Shandong University, China (IIFSDU, Grant No. 2010TS009). We would like to appreciate Dr. Yuan-tao Liu for critical reading of the manuscript.