Objective: To investigate the incidence of high-risk human papillomavirus (HPV) infection and its clinical meaning.

Methods: Total 28,339 women attending our hospital for routine gynecologic care underwent Papanicolaou test (PAP test) and high-risk HPV tests. Biopsies were taken from some women and their results were compared.

Conclusion: Although HPV test has a burden of cost, considering its high negative predictive value, HPV test should be considered for more useful screening test.

In contrast to other types of cancer, uterine cervical cancer can be diagnosed at a preinvasive stage. Treatment outcomes at this stage are excellent, and appropriate screening can lead to early treatment, before progression to cervical cancer, and a complete cure. Thus, the establishment of an effective and reasonable screening method would be more economical and effective than the development of good therapies for cervical cancer.

We assessed 28,339 women who visited the Department of Gynecologic Oncology at Saint Vincent Hospital of the Catholic University of Korea from 1999 to 2009 for routine gynecologic examinations and underwent PAP and HPV tests. HPV tests were conducted using an in vitro hybridization assay (HC II HPV DNA test, Digene). Patients who previously diagnosed any other malignancy including cervical cancer were excluded.

Biopsy samples were taken from patients suspected of having preinvasive or cervical cancer; these samples were assessed histologically, and those diagnosed as having higher than CINII stage were assessed for association with positivity on the HPV test using ANOVA.

Results of PAP and HPV tests.

Rates of HPV positivity by age.

To determine whether HPV titer was associated with cervical diseases, we divided patients into 4 groups based on HPV titer (Table 4). However, we found no correlation between HPV titer and disease status (P>0.05).

Flow sheet of patient management. The numbers in parentheses are the numbers of patients. 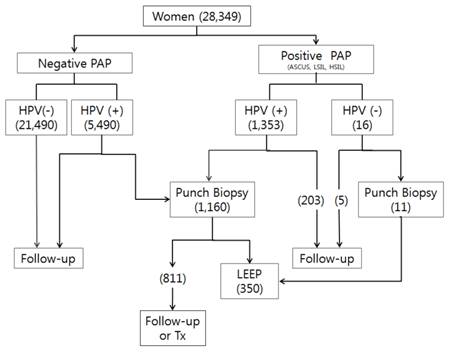 Prevalence of HPV positive patients with higher than CIN II histology according to age. 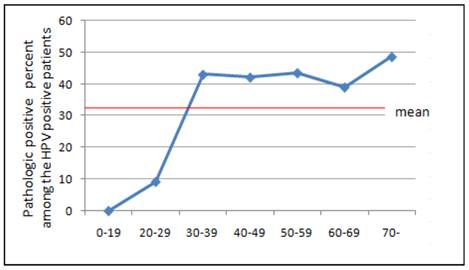 PAP test is used to identify preinvasive cervical lesions, thus allowing appropriate treatment, not to diagnose invasive cervical cancer. Most clinicians recommend yearly screening tests for cervical cancer starting at around age 21 years or within 3 years of the initiation of sexual activity. Twice yearly testing is recommended for patients with suppressed immunity, such as those with HIV/AIDS, after recommencing sexual activity (1).

Until around age 30 years, conventional PAP test should be performed annually, with liquid-based tests performed every other year. After age 30 years, women who are not immunosuppressed and those with 3 consecutive annual negative results should be tested every 2-3 years. Although women aged 65 to 70 years with three consecutive negative results may not have to be screened for cervical cancer for the next 10 years, regional differences should be considered (2, 3). While total hysterectomy makes screening tests for cervical cancer meaningless, women who have undergone subtotal hysterectomy or total hysterectomy for noninvasive or invasive cervical cancer require screening similar to the general population (4).

Although PAP test is the easiest and most widely available tests for cervical cancer, correct test results are difficult to obtain in women with lesions located in the endocervix or endometrium, as well as in patients with glandular neoplasms. PAP test is also not considered appropriate for immunosuppressed patients, patients exposed to diethylstilbestrol in utero, and patients being followed up after diagnosis of and treatment for cervical cancer (5).

Liquid-based PAP tests are as sensitive as conventional PAP test, while also being able to assay specimens inadequate for the latter (6). Liquid-based PAP tests have other advantages, including the ability to repeatedly test identical specimens. In addition, the specificity of liquid-based tests is as high as that of conventional Pap tests in screening for endocervical neoplasia and atypical glandular cells (AGC) (7). To date, however, the results of liquid based tests have not been accepted by all clinicians and the cost of such tests is higher than that of the conventional PAP test.

Since HPV infection of the reproductive system has been shown to be a direct cause of cervical cancer, assays of HPV infection have been used to diagnose this neoplasm. Molecular biological tests for HPV DNA can be broadly classified as hybrid capture (HCII) methods, which simultaneously screen for 13 viral types, and PCR methods, using consensus primers. The sensitivity and specificity of both methods are higher than those of PAP tests (8).

We found that the prevalence of high risk HPV infection was 24.5%. Of these patients, 19.8% showed more than ASCUS lesions on PAP test. It is considered cost effective to perform HPV tests when PAP test is abnormal. Women with abnormal findings on PAP tests are usually re-examined and tested by HPV tests. Women who undergo both PAP and HPV tests at their initial visit they have to pay the costs of HPV test even their PAP results are negative. In contrast, their results of PAP tests are higher than ASCUS can save the cost and time for a second visit. In sometimes due to the false negativity of PAP test and the psychological burden of PAP test results, the decision to perform HPV tests depend on each patient. Furthermore in geographic areas of high cervical cancer prevalence, it may be more cost effective and convenient to perform conventional PAP and HPV tests simultaneously although the frequency of liquid-based PAP tests are increasing, thus reducing the inconvenience of collecting specimens twice.

In our results women aged 20-29 years had the highest frequency of HPV infection. But considering the first sexual experiences and a social atmosphere that discourages visits to obstetrics/gynecology clinics, women aged 0-19 years may have the higher frequency than they are showed.

When we assessed the age distribution of HPV infected patients with disease higher than CINII, we found the highest frequency in women older than 70 years; however, the number of individuals in this group was quite small. We also observed a relatively even distribution in women aged 30 to 59 years.

Over 90% of women with HSIL or cervical cancer had high risk HPV. Thus it is clear that HPV test is a very useful tool for cervical cancer screening. Therefore, although HPV test has a burden of cost, considering its high negative predictive value, HPV test should be considered for more useful screening test.