Intracranial dermoid cysts with hemorrhage are fairly rare. Herein, we reported a 28-year-old female patient with a cerebellar dermoid cyst, which was found accidently on neuro-imaging after head trauma. MR scanning revealed that the lesion was located within the cerebellar vermis and was measured 3.5cm×3.9cm×3.0cm, with hyper-intensity on T1WI and hypo-intensity on T2WI. However, on CT imaging, it showed hyper-dense signals. It was removed completely via midline sub-occipital approach under surgical microscope. Histological examination proved it was a dermoid cyst with internal hemorrhage. In combination with literature review, we discussed the factors that might be responsible for the hemorrhage within dermoid cysts.

Dermoid cysts are rare congenital benign lesions originating from ectopic inclusion of epithelial cells during the neural tube closure in the third to fifth week of embryonic development. They accounts for approximately 1% of intracranial tumor-like lesions, with the highest incidence in the adults aged from 30 years to 40 years [1]. Although dermoid cyst rupture caused by trauma is not uncommon, it has never been reported that head trauma could lead to the hemorrhage within intracranial dermoid cyst. Herein, we report a case of intracranial dermoid cyst with internal hemorrhage resulting from head trauma.

A 28-year-old female patient was emergently sent to a local hospital due to being hit by a falling object in the head. When the examinations with CT and MRI were finished, she was transferred to our hospital for further treatment 7 days later. On physical examination, neither neurological deficit nor midline cutaneous abnormalities were found. CT scanning revealed that a lobar hyperdense lesion with an internal irregular isodense area was located in the posterior fossa (Figure 1). On MR imaging, the lesion was hyper-intensive on T1WI and hypo-intensive on T2WI, located within the cerebellar vermis and measured 3.5cm×3.9cm×3.0cm (Figure 1).

No abnormalities were found preoperatively in the blood count, serum biochemistry, bleeding time, prothrombin time and partial thromboplastin time. She underwent craniotomy via midline suboccipital approach on the eighth day after the head trauma. During surgery, we found the lesion mimic a melanoma by its dark-brown appearance, but its capsule was partially calcified and lined interiorly with yellow fat. Its content consisted mainly of chocolate-like material, hair and old hematoma (Figure 1). Further exploration revealed a solid nodus at the internal side of the capsule, which was hard and in dark-red color. The lesion was resected completely under surgical microscope. The findings of histological examination included squamous epithelium, calcification, keratinous material, hairy substance, hemorrhage, and sheets or nests of hemosiderin-containing histiocytes, which were consistent with the histological features of dermoid cysts (Figure 1). Postoperatively, the patient recovered uneventfully and was discharged. At fellow-up of two and half years, she lived a normal life without any neurological deficits.

Despite no cases of intracranial dermoid cysts has ever been reported to be with internal hemorrhage due to head trauma, by now, spontaneous hemorrhage had been found in four patients with intracranial dermoid cysts [5-7]. Although we do not know why hemorrhage would take place in dermoid cyst, we could refer to the mechanisms which were used for explaining the hemorrhage within brain tumors. In the case of brain tumors, pathological deficits in the walls of the tumoral blood vessels such as hyalinization, necrosis or degeneration are thought to be the main factors leading to the hemorrhage within tumors [8]. Considering three of the four cases with hemorrhagic dermoid cysts were over sixty years of age (Table 1), we speculate the degeneration of the blood vessel might be responsible for the intra-tumoral hemorrhage in elderly patients, despite no detailed description could be found in these reports. 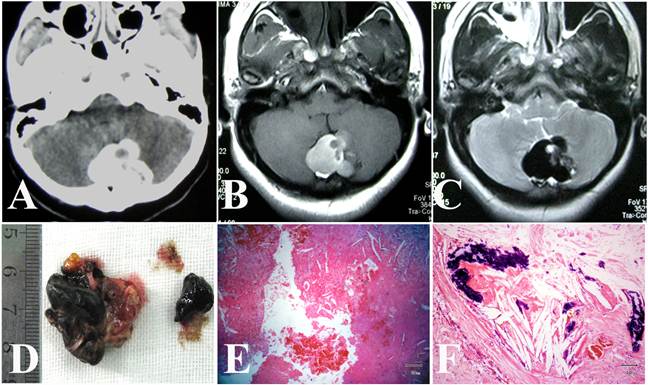 Summary of intracranial dermoid cysts with hemorrhage reported to date

Different with those three cases, the forth case was a 16-year-old boy [9]. His intracranial dermoid cyst enhanced homogeneously when contrast medium was used, which was very rare because dermoid cyst usually presented peripheral enhancement on contrast imaging. Thus, the boy case might indicate that hyper-vascularity might be another factor in association with hemorrhage within dermoid cysts. For our case, the patient is a young female at the age of 28, and no abnormalities were found preoperatively in the blood count, serum biochemistry, bleeding time, prothrombin time and partial thromboplastin time. Therefore, we think that head trauma is the inducer responsible for the hemorrhage within her dermoid cyst.