A 46-year-old female was admitted to the hospital due to a sudden onset of headache that had lasted for 5 hours. Physical examination showed neck stiffness and Kernig's sign but no other positive signs of the nervous system. Computed tomography (CT) showed a high-density space-occupying lesion in the trigone of the left lateral ventricle. Hemorrhage surrounded the lesion and formed a hematoma, which extended forward into the contralateral ventricle and affected the third and fourth ventricles (Figure 1). Computed tomography angiography (CTA) showed no intracranial artery malformation. The medial blood vessels of the lesion in the trigone of the lateral ventricle were disordered, and the lesion was supplied by anterior and posterior choroidal arteries. Maximum intensity projection clearly revealed a high-density calcification shadow at the rear of the lesion, and the surrounding brain tissues were mildly compressed (Figure 2). Magnetic resonance imaging (MRI) showed that the area of the lesion was 2.86 cm × 2.68 cm with mixed T1WI and T2WI signals. The lesion was heterogeneous in density, and its center was cystic. Slightly high abnormal T1WI and T2WI signals were noted in the bilateral lateral ventricles, and fluid was visible in the occipital horn of the left lateral ventricle (Figure 3).

An initial diagnosis of a space-occupying lesion with hemorrhage in the trigone of the left lateral ventricle was given based on the medical history, physical examinations, and auxiliary examinations. However, the nature of the lesion remained undetermined, and lesion resection was scheduled. The lesion was accessed using the left temporoparietal approach. After old blood clots were partly removed, a well-defined, red, parenchymatous tumor with a complete capsule was exposed. The tumor had abundant blood supply, and adhered slightly to the walls of the lateral ventricle. The central part of the tumor was cystic, and the root originated from the choroid plexus and had a clear arterial blood supply.

After controlling arterial blood supply, the surgery was successful, and the tumor was completely removed. Postoperatively, the patient recovered well. However, at day 7 the patient became depressed and then entered a confused state of mind. Physical examination revealed a dilated left pupil (4.5 mm in diameter), lack of a pupillary light reflex, and a paralyzed right limb accompanied by pathological reflex. Head CT showed severe edema surrounding the surgical field. The ipsilateral ventricle was compressed and deformed and the midline had shifted to the opposite side, which was considered to be brain herniation caused by cerebral edema. Emergency treatment with decompression via bone removal was performed (Figure 4). Postoperatively, the patient recovered well but developed left homonymous hemianopia. The patient was in a good state at the 6-month follow-up, but the hemianopia did not resolve.

CT at the time of onset of intraventricular hemorrhage. A-B: A space-occupying lesion in the trigone of the left lateral ventricle was observed; it had a low-density cystic shadow in the middle (arrow). A high-density calcification shadow was detected at the rear of the lesion, and the surrounding brain tissues were mildly compressed. C: Hemorrhage surrounded the lesion and formed a hematoma, which extended forward into the lateral ventricle, and the hemorrhage affected the third ventricle (arrow). D: The hemorrhage also affected the fourth ventricle (arrow). 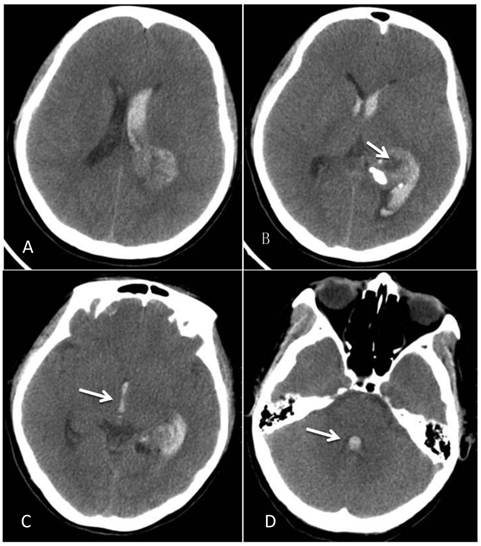 CTA after the onset of intraventricular hemorrhage. A: No intracranial artery malformation was observed; medial blood vessels of the tumor in the trigone of the lateral ventricle were disordered, and the tumor was supplied by anterior and posterior choroidal arteries (oval area). B: Maximum intensity projection revealed a high-density shadow in the trigone of the left lateral ventricle; the surrounding vessels were disordered, and a high-density calcification shadow was detected at the rear of the lesion (arrow). 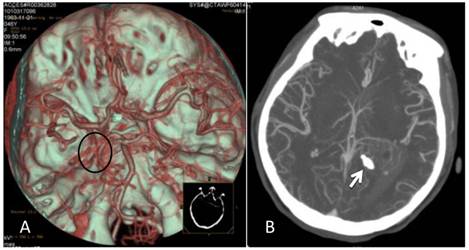 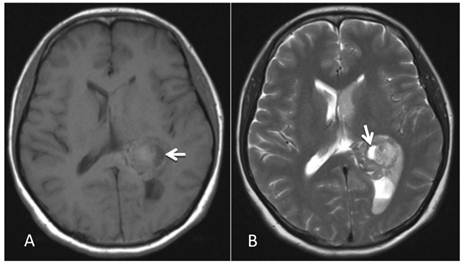 Postoperative CT. A: Re-examination at day 7 post operation showed that the tumor had been removed but that severe edema surrounded the lesion and the midline had shifted to the opposite side. B: After decompression, there was still edema surrounding the trigone of the lateral ventricle, but the midline was located in the middle. 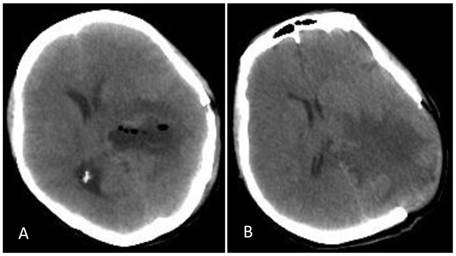 Pathological examination. A: The tumor was composed of fusiform cells; the shape of the cells was between that of endothelial and fibroblast types (i.e., transitional type; WHO-Grade I). B: Cystic cavities were seen in the tumor tissues (arrow). C: Patchy hemorrhage was observed inside the tumor, within which dilated tortuous blood vessels were observed (arrow). 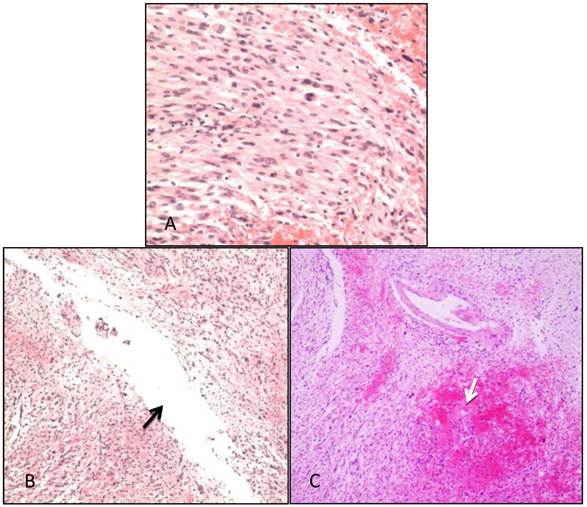 Postoperative pathological results showed that the tumor was composed of fusiform cells. In addition to the observed hemorrhage and cystic changes, dilated, tortuous vessels were visible within the tissues. The shape of the cells was between that of endothelial and fibroblast types. Thus, the lesion was diagnosed as transitional meningioma (WHO-Grade I) (Figure 5).

Meningiomas of the ventricular system are rare; most of these tumors arise in the left lateral ventricle and over 90% occur in the trigone [3,6,7]. The clinical manifestations of lateral ventricular meningiomas depend largely on tumor size: A small tumor often causes no symptoms because the lateral ventricle has a relatively large compensating space, but notable symptoms, such as increased intracranial pressure and local neurological deficits, may appear when the tumor is large [8,9]. However, lateral ventricular meningiomas presenting with intraventricular hemorrhage are extremely rare: Eight such cases have been reported to date [10-13]. Herein we described one such case and conducted a review of other cases to increase our understanding of this disease.

The cause of hemorrhage from intraventricular meningioma is unknown. Several hypotheses have been proposed [14,15]. First, the vascular network within the meningioma may rupture due to its abnormal development [16]. Second, a rapidly growing meningioma or internal necrosis after venous thrombosis may lead to hemorrhage [17]. Third, arteries that feed the meningioma are dilated and tortuous and thus lose the ability to regulate blood pressure fluctuation [18]. Fourth, expansive growth of the meningioma stretches and tears bridging veins [19]. Other factors, such as coagulation disorder inside the meningioma, peritumor edema, infarction within the tumor, and malignant transformation of the tumor may also result in hemorrhage of intracranial meningiomas [14]. Of these hypotheses, the first one is the most widely accepted, but it still cannot explain all meningioma hemorrhages because not all meningiomas demonstrate abnormal blood vessel development [18,19]. Thus, a combination of the aforementioned factors may play a part in this process [14].

Our analysis of the present case revealed the following: The meningioma was composed of fusiform cells; the shape of the cells was between that of endothelial and fibroblast types and no high grade malignant tumor cells were noted; dilated tortuous vessels surrounded by hemorrhage were visible in the tissues; and no necrosis or infarction was observed in the tumor tissues adjacent to the hemorrhagic area. Therefore, we concluded that the hemorrhage in this meningioma resulted from ruptured blood vessels, and that the hemorrhage infiltrated the tumor tissues due to the pressure gradient. Accordingly, the first and third hypotheses best explain the hemorrhage of this meningioma.

For the meningiomas of the trigone of lateral ventricle, there are several approaches used, such as superior parietal lobe approach and parieto-occipital approach [22]. In our case, we chose the temporoparietal approach instead of other approaches, because as shown by the CTA image, the lesion was supplied by anterior and posterior choroidal arteries, and maximum intensity projection clearly revealed a high-density calcification shadow at the rear of the lesion. It was convenient to control the arterial blood supply using the temporoparietal approach. The surgery was successful, and the tumor was completely removed after the control of arterial blood supply. However, at day 7 the patient became depressed and entered a confused state of mind. CT showed brain herniation due to the occurrence of cerebral edema. The mechanism of postoperative edema surrounding the surgical field in this case is different from the edema surrounding meningioma, which is associated with venous compression, tumor-related pressure, arterial blood supply and secretion of angiogenic factors such as vascular endothelial growth factor [23]. In this case the postoperative edema surrounding the surgical field mainly resulted from surgical trauma after tumor removal.

By conducting a literature review, we identified eight previously reported cases of hemorrhage caused by ruptured lateral ventricular meningioma (Table 1). Among these, six were in females (75%), revealing a female predominance; age of onset ranged between 14 and 64 years (mean 43); five cases were located on the left side and three cases on the right side; and all were located in the trigone of the lateral ventricle. When stratified by pathology, five cases were fibroblastic type (62.5%), two cases were endothelial type, and one case was psammomatous type. The present case had similar age of onset, gender, location, and affected side as those of the previous cases, but it had a transitional pathological type, which differed from other cases. Overall, the clinical and pathological features of ruptured lateral ventricular meningioma causing hemorrhage are comparable to those of unruptured lateral ventricular meningioma without hemorrhage [3-6].

Patients presenting with the hemorrhage from lateral ventricular meningiomas