Nervous system injuries associated with epidemic hemorrhagic fever (EHF) are not rarely seen. However, cerebrovascular disease arising from EHF is rarely reported in the literature. A 50-year-old male patient suffered from subarachnoid hemorrhage (SAH). No abnormal condition was found in intracranial vascular digital subtraction angiography (DSA). But, this patient presented with positive hantavirus-IgM and IgG, with typical clinical process, which lead to the diagnosis of EHF followed by SAH. To our knowledge, SAH associated with EHF has not been previously reported. A meticulous assessment of EHF patients with a serious condition had one or more central nervous system (CNS) abnormalities, such as sudden headache, vomiting, confusion, meningismus, and convulsions, which is necessary for diagnosing and giving timely treatment to improve the prognosis.

The nervous system injuries associated with epidemic hemorrhagic fever (EHF) are not rarely seen, such as nervous system infection, hypophysis function decline, epilepsy, peripheral neuropathy, cerebrovascular disease and so on1,2,3,4,5. However, cerebrovascular disease arising from EHF is rarely reported. Cases presented in the literature are of cerebral lobe hemorrhage and cerebral infarction caused by EHF6. Here, we reported a rare case of subarachnoid hemorrhage (SAH) which was associated with EHF.

In October 2008, a 50-year-old man presented with progressive fever, headache, nausea and vomiting for five days. On physical examination, the temperature was 39 ℃, blood pressure (BP) was 86/60 mm Hg, bulbar conjunctiva was congestive. But his neurological system and other systemic examinations were unremarkable. His white blood cell was 23×109/L, haemoglobin was 166g/L, blood platelet was 79×109/L, urea was 16.85 mmol/L, creatinine was 291 umol/L and uric acid was 496 umol/L. The results of prothrombin time (PT), activate part blood coagulation time (APTT), thrombin time (TT) and fibrinogen (FIG) were in normal range. Both hepatitis B and C virus test were negative. Cerebral computed tomography (CT) scan was normal (Fig. 1). The electroencephalogram showed slight abnormality, and both intracranial pressure and cerebrospinal fluid were normal. The patient was diagnosed and treated as viral encephalitis. However, seven days later, his headache became more and more serious and the second cerebral CT presented SAH (Fig. 2), but there was no remarkable finding on neurological examination. The next day, he presented neck rigidity. Therefore, intracranial vascular digital subtraction angiography (DSA) was carried out to find out the cause of SAH. However, the result of DSA was unremarkable (Fig. 3A and B). In order to find out the pathogen, we consulted a doctor for infectious diseases; she considered it to be EHF and suggested us to detect the serum antibody EHF-IgM and EHF-IgG, and both results were positive by indirect immunofluorescence in our central laboratory. 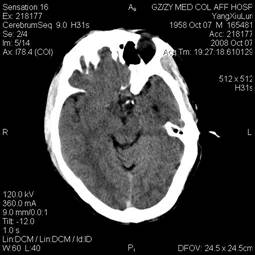 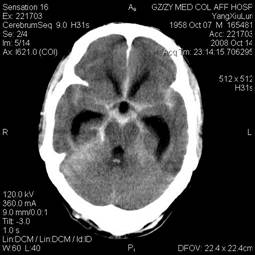 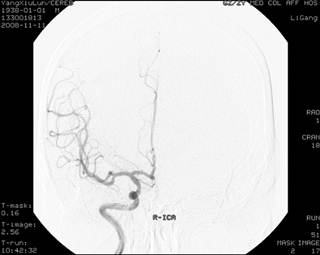 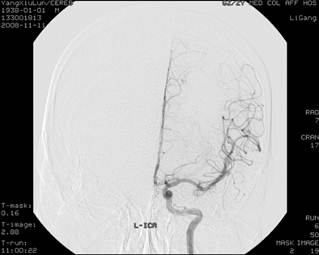 There is a high incidence of EHF by hantavirus in Chinese zunyi, which is a mountainous district. The popular season in zunyi is unimodal, which means a popular peak from October to next January7. According to the state of illness, its epidemiology features, and the positive laboratory examination results, this patient was diagnosed as EHF clearly. Therefore, ribavirin was given as antiviral treatment, and symptomatic and supportive treatment are available, such as absolute bed rest, mannitol dehydration, etamsylate stanching, correcting ion disorders, etc. One month later, he recovered well.

EHF caused by hantavirus is a severe systemic infection, with acute shock, vascular leakage, hypotension, and acute renal failure. Its clinical courses are divided into five phases: febrile, hypotensive, oliguric, diuretic and convalescent1,2,8. Hantavirus EHF with renal syndrome could be found in most region of China. Another haemorrhagic fever caused by dengue virus with renal syndrome is found mainly in the south of China9. Cases of the performance of nervous system damage after EHF were sporadically reported. And this case was to report, for the first time, the SAH associated with the EHF. As is known to all, the causes of SAH are intracranial aneurysm and intracranial vascular malformations or agenesis10,11. Clinically, patients with suspected SAH could be diagnosed by the head CT or lumbar puncture, and DSA is the most effective way to find out the causes of SAH. But there is no abnormal condition in the DSA in our patient. Diagnosis of EHF is mainly based on the smptoms and a history of exposure to the endemic focus area where Zunyi is an epidemic area of EHF. Moreover, this patient presented with positive hantavirus-IgM and IgG, and his clinical process was representative. The whole appearance is like EHF followed by SAH, although the familiar bleeding part of EHF is not in the subarachnoid space2.

With the pathogenesis of EHF and patient information, the causes of SAH may be associated with the following factors. On the one hand, the balance of blood coagulation and fibrinolysis is lost from the early stage of EHF, TT and PT are prolonged, FIG, antithrombin-III (AT-III) and plasminogen (PLG) are decreased and fibrin-fibrinogen degraded products (FDP) is increased. Besides, the decrease of platelet count, the platelet functions of aggregation and release are below the normal level12. On the other hand, the virus can induce the production of immune complexes and cytokines, which can damage the brain small blood vessels13. In addition, prior to the onset of SAH, his emotion is unstable, which may cause the change of BP and lead to blood vessel rupture.

The fatality rate of EHF is less than 5% nowadays, and if early diagnosis is made the fatality rate decreases8, whereas mortality among EHF patients with central nervous system (CNS) disturbance is 41%14. Despite the serious condition of SAH associated with EHF, the treatment is mainly supportive. Careful fluid restriction and bed rest as well as sedation are essential. Control of body temperature is necessary and aspirin or cold sponging is recommended for high fever8. Ribavirin increased the number of survivors and the mean time to death in suckling mice infected with hantavirus, which significantly reduced mortality in patients with hemorrhagic fever with renal syndrome in China15. Anti-hantavirus-neutralizing monoclonal antibodies for treatment and prevention of hantavirus infection is an immunotherapy. Phase II clinical trials of this immunotherapy for emergent treatment of patients with hantavirus infection in early stages of hemorrhagic fever with renal syndrome are carried out in endemic areas in China16. To sum up, EHF patients with a serious condition could have one or more CNS abnormalities, such as sudden headache or headache aggravated, vomiting, confusion, meningismus, and convulsions. Physicians need to consider the possibility of merging SAH, make further head CT and lumbar puncture or DSA examination, and give timely treatment to improve the prognosis.