Aspergillus abscesses in the cerebellum are extremely rare, and most cases are solitary. Here, we report the first case of multiple Aspergillus cerebellar abscesses in a 46-year-old female after one mastoidectomy, two craniectomies, and extended use of antibiotics. The possible pathogenesis of this unusual event is discussed. Good outcome was achieved by treatment with a combination of neurosurgical resection and voriconazole (VRC) administration, which we suggest is a potential management plan.

A 46-year-old female patient with chronic otitis media with cholesteatoma underwent a mastoidectomy in May 2009. In April, 2010, she was referred to our department with headache and cerebellar signs. At that time, magnetic resonance imaging (MRI) of the brain showed a ring-enhancing lesion in the right cerebellum. Symptoms were progressively worsening despite the use of antibiotics. Hence, she underwent a suboccipital craniectomy to remove the entire lesion containing yellow pus. Pathological examination revealed chronic inflammation with a pyogenic abscess. The diagnosis of otogenic cerebellar abscess was made. The patient continued to receive antibiotics for 6 weeks due to persistent high fever. After a symptom-free interval of 5 months, she presented with walking instability, fever, external otitis and severe headache. She was again admitted to our department. Inflammation parameters (erythrocyte sedimentation rate (ESR), C-reactive protein (CRP) level and white cell count (WBC)) were abnormally high. MRI revealed multiple oval-shaped contrast-enhanced lesions with irregular thick peripheral enhancement which were hypointense in T1-weighted images and hyperintense in T2-weighted images in the right cerebellum. The lumbar-puncture cerebrospinal fluid pressure was high: 400 mmH2O. The WBC was 112×106/L, protein was 43.6 mg/dL and Pandy's test was positive. Initially, a diagnosis of pyogenic abscess was made according to medical history. Unfortunately, her symptoms did not resolve and her fever persisted after 2 months of intravenous administration of antibiotics. Hence, a second suboccipital craniectomy had to be done for subtotal resection of the mass. Histopathological examination demonstrated the branching septate hyphae of Aspergillus. The culture from the pus revealed infection by Aspergillus fumigatus. Voriconazole (VRC) therapy (400 mg/day) started immediately after surgery. During follow-up for 5 months, the residual lesions were seen to shrink under MRI. She had dysphagia and was choking on drinking water; a nasogastric tube was a helpful and necessary tool for her. VRC therapy (p.o.) was maintained for several months.

Enhanced MRI and CT of the brain through the entire course of the illness. (A) and (B) Enhanced MRI showing a ring-enhancing lesion in the right cerebellum suggesting an otogenic pyogenic abscess (arrowhead). (G), (H) and (I) Enhanced MRI showing multiple oval-shaped contrast-enhanced lesions (arrow) with irregular thick peripheral enhancement which were hypointense in T1-weighted images and hyperintense in T2-weighted images and which occupied the right cerebellum. 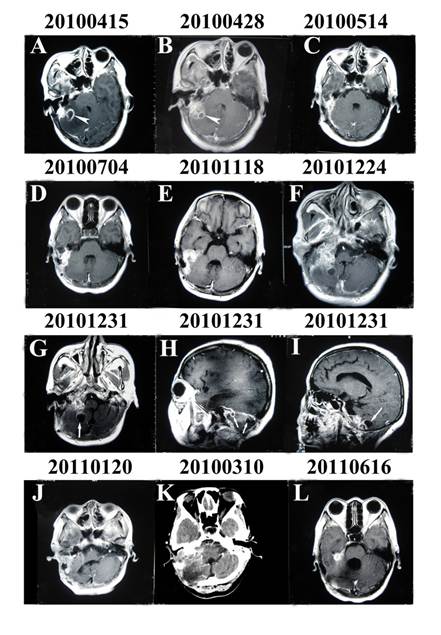 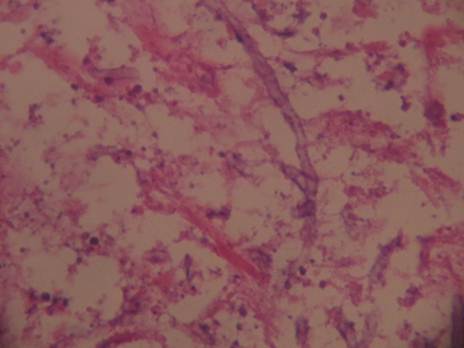 Time-course of the entire illness. 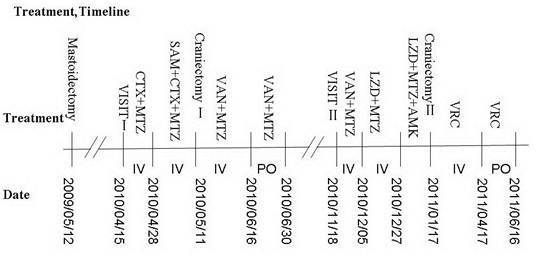 Aspergillus in the central nervous system (CNS) is a rare occurrence in immunocompetent hosts. However, it is associated with a very poor prognosis and high mortality (88-99%) 1,2. Aspergillus spores have a predilection for the anterior and middle cranial fossa3,4. Aspergillus abscesses in the cerebellum are extremely rare, and only a few cases of purely cerebellar aspergillosis have been reported5,6,7,8. Most cases are solitary. Our case was the first histopathology-proven case of multiple cerebellar abscesses caused by Aspergillus. This case suggests that Aspergillus abscesses should be one of the differential diagnoses of patients with multiple cerebellar lesions.

The modes by which Aspergillus spreads to the CNS are hematogenous, direct, or as a primary intracranial lesion9. The etiology in our case was unknown but there were three possible causes. Firstly, the importance of otogenic infection in causing cerebellar abscess is undisputed. Aspergillus spores are commensal in the external auditory canal10. Parize et al.11 reported that Aspergillus can spread from the external auditory canal to adjacent anatomical structures. Kim et al.12 reported one case of cerebral aspergillosis after radical mastoidectomy and labyrinthectomy for chronic Aspergillus otitis media. In our patient, Aspergillus invasion into the cerebellum would have been aided by the lack of mastoid after mastoidectomy. Furthermore, multiple abscesses were located near the mastoid area, suggesting an otogenic mode of spread. Secondly, there have been some reports about direct inoculation after iatrogenic neurosurgical procedures12,13. Endo et al.14 reported a case of Aspergillus parasellar abscesses after transsphenoidal surgery and radiosurgery. The stress of surgery may also be contributory factor for fungal growth10. Hence, we cannot exclude the possibility that Aspergillus contamination occurred during the first craniectomy. According to the first pathological examination, some broad-spectrum antibiotics (vancomycin (VAN), metronidazole (MTZ) and linezolid (LZD) were used for >3 months. Long-term (even indiscriminate) use of antibiotics between the two craniectomies in our patient resulted in depressed immune responses. As previously reported13,15, such depressed immune responses may have an important role in the increased incidence of previously rare clinical events. Mylonakis et al.16 suggested that the use of broad-spectrum antibiotics for ≥3 months could be a predisposing factor for CNS aspergillosis. This indicated that antibiotic abuse may be a possible predisposing factor for multiple Aspergillus cerebellar abscesses.

The management of cerebral fungal abscesses is controversial17. There has been only a few case reports detailing survival in such scenarios. Some authors suggest that patients with Aspergillus abscesses would benefit from resection combined with administration of antifungal drugs18,19. Resection might be effective in patients with a focal CNS aspergillosis lesion; one study stated that mortality can be reduced from 64% to 39% in such circumstances20. Some authors state that surgical biopsy as a routine procedure can help in the early diagnosis of, and early intervention in, Aspergillus abscesses21. Conversely, Aspergillus abscess can be managed by antifungal drugs provided the organism is known, the size of the abscess is small, and the source of the infection has been located. However, antifungal therapy alone of CNS aspergillosis has revealed disappointing results, with mortality >90% in most series18. The most probable reason for such outcomes is poor penetration by antifungal drugs into the CNS. One exception to this rule is the novel antifungal drug, VRC22,23. A large randomized study demonstrated that VRC offered greater benefit over amphotericin B as the mainstay of therapy for aspergillosis24. Our patient was treated with VRC immediately after resection, which led to a favorable outcome. Based on reports from the literature20,25,26 and our patient, we believe that there is a trend towards a better prognosis for multiple cerebellar Aspergillus abscesses due to a combination of resection and VRC therapy.

In summary, we illustrated a case of aspergillosis that was unique in three respects. First, multiple Aspergillus abscesses were located in the cerebellum of an immunocompetent subject. This finding highlights the importance of being alert to such infections in immunosuppressed and immunocompetent patients. Second, the cause of aspergillosis in our patient was not elucidated, but could have been due to otogenic invasion, iatrogenic introduction by a primary craniectomy, or indiscriminate use of antibiotics. Third, good outcome was achieved by treatment with a combination of resection and VRC administration in this otherwise fatal disease.