This study was undertaken to investigate the pregnancy outcomes in patients with systemic lupus erythematosus (SLE) and the appropriate timing of pregnancy. We performed a retrospective evaluation of 183 pregnancies with SLE at Catholic University Medical Center during the 13-year period from 1998 to 2010. Pregnancy outcomes were compared according to SLE characteristics. The predictive value of the different cut-off points of the stable period before conception on adverse pregnancy outcomes was calculated by ROC (Receiver operating characteristics) curve analysis. In multivariate analysis, the presence of antiphospholipid antibodies (aPLs) increased the risk of pregnancy loss (p<0.0001) and premature birth (p=0.0040). Active disease at conception increased the risk of premature birth (p< 0.0001) and complications (IUGR, PIH, or both) (p= 0.0078). The other predictor of complications was found to be lupus flare (p=0.0252). At a cut-off level of stable period of 4 months before conception, sensitivity and specificity were 70.8% and 53.2%, 71.4% and 61.5%, and 63.6 % and 59.8 %, respectively on reducing pregnancy loss, premature birth, and complications. Pregnancies with aPLs, active disease at conception and SLE flares are at a higher risk of adverse outcomes. It is essential that disease activity remains stable at least 4 months before conception, for favorable pregnancy outcomes.

Systemic lupus erythematosus (SLE) is a multisystem autoimmune connective tissue disorder that primarily affects women of childbearing age. It is recognized that the pregnancy may exacerbate SLE, and the SLE may increase the pregnancy complications, including spontaneous abortion, premature delivery, intrauterine growth restriction (IUGR), and preeclampsia [1].

The timing of conception, management of pregnancy and treatments in women affected by SLE, as well as SLE inheritance, are challenging issues for obstetricians worldwide, in particular in Asian countries where there is lack of reports on these issues concerning Asian pregnant women. Therefore, it is mandatory to investigate the timing of pregnancy in women with complicating SLE, as well as the perinatal management, which is important for the reduction of the mortality of women and infants, and the improvement of neonatal survival rate in pregnancy complicating SLE. Even though several recommendations for the management of SLE have been developed and pregnancy recommended to be planned when SLE is in remission, there is lack of evidence regarding how many months the remission period should last before experiencing the trial of pregnancy in order to decrease adverse pregnancy outcomes [8-10].

We performed a retrospective study of 183 pregnancies occurring in 143 patients with SLE (as defined by the 1997 revised American College of Rheumatology [ACR] criteria) [11] managed in the department of internal medicine and department of obstetrics and gynecology at Catholic University Medical Center, Korea, during a period between 1 January 1998 and 31 December 2010. Fifteen pregnancies with SLE were excluded because we did not know pregnancy outcomes due to follow up loss.

Demographic data, SLE clinical manifestations and treatment, SLE disease activity index (SLEDAI) [12], maternal SLE status (flare or no flare), pregnancy data, its outcome and therapy were recorded from medical charts. Laboratory data included complete blood count, urinalysis, antinuclear antibodies (ANA), anti-Ro/SSA antibodies, anti-La/SSB antibodies, and antiphospholipid antibodies (aPLs). Positive aPLs were defined as more than one presence of anti-cardiolipin Antibodies, β2 glycoprotein, or lupus anticoagulant antibody. The pregnancy outcomes retrieved were live births including term and preterm births, pregnancy loss including miscarriages, stillbirths and neonatal deaths, as well as gestational age at birth in weeks, infant birth weight, delivery mode, lupus flare, oligohydramnios, preterm premature rupture of membrane, IUGR, and pregnancy induced hypertention (PIH), low Apgar score, and congenital anomaly. A flare was defined as onset of new signs of SLE disease activity during pregnancies in patients previously in remission. The criteria for relapse or flare-up of SLE included new evidence of acute synovitis, serositis, pruritis, typical skin lesions, new psychological or neurological symptoms (in the absence of eclampsia), haematological parameter revealing leucopenia, thrombocytopenia or active renal disease during pregnancy. Renal involvement was defined as the following: proteinuria [500 mg/day (in the absence of preeclampsia), cellular casts in urine and dysmorphic hematuria] [13]. SLE flare including renal or CNS involvement and requiring hospitalization for management of flare up was classified as severe type. Premature birth was defined as a live birth occurring before 37 weeks of gestation, stillbirths as no signs of life in a fetus delivered after 24 weeks of gestation, and low birth weight as <2.5 kg birth weight of infant at term. Pregnancy outcomes were compared between SLE patients with and without different characteristics including lupus nephritis, ANA, anti-Ro/SSA antibodies, anti-La/SSB antibodies, aPLs, disease activity at pregnancy and lupus flares during pregnancy.

Statistical analysis was performed by t-test, chi-square test, or Fisher's exact test as appropriate. Stepwise multiple logistic regression analysis was employed to find the risk factors for adverse pregnancy outcomes. The predictive value of the different cut-off points of the stable time period of SLE before conception on adverse pregnancy outcomes including pregnancy loss, premature birth, and complications of IUGR, PIH, or both was calculated by ROC (Receiver operating characteristics) curve analysis. Statistical calculations were performed with SPSS version 19.0 (SPSS, Chicago, IL, USA). A p-value <0.05 was considered significant.

Comparison of pregnancy outcomes according to different SLE characteristics

* N, not equal to the sum of IUGR and PIH+IUGR due to the omission of other complications

Pregnancy outcomes in patients with disease status of SLE at conception

We presented only the values which are significant at 0.15 level in stepwise multiple logistic regression. 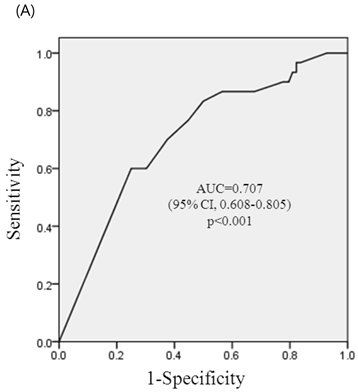 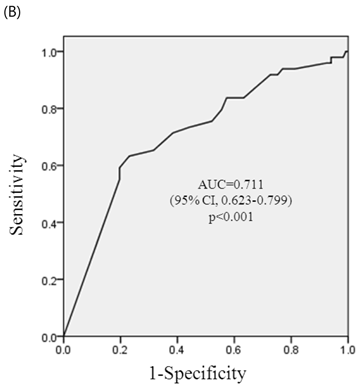 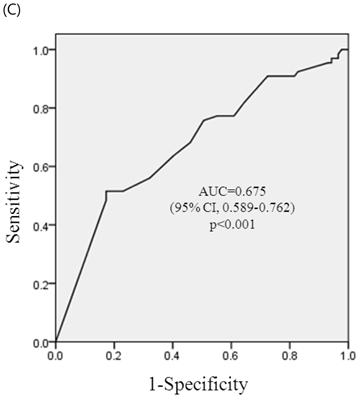 Because SLE is a multi-system, complex illness, pregnancy is a challenge for lupus patients and their physicians. It is recognized that pregnancies in women with SLE show high rates of SLE flare, hypertension, nephritis, and preeclampsia, although some reports show different results. Fetal complications included spontaneous abortion, stillbirth, neonatal death, and IUGR [14]. These risks are increased in the presence of anticardiolipin antibodies or lupus anticoagulant, lupus nephritis or hypertension and if there is either active disease at the time of conception or first presentation of SLE during pregnancy.

Several studies have suggested that nephritis may contribute to adverse maternal and fetal outcomes [15,16]. However, studies of the associations of SLE and lupus nephritis with pregnancy outcomes showed significant variation with respect to study design, definitions, statistical methods, bias and outcomes. Early studies reported poor clinical outcomes, but a number of recent papers have shown that outcomes are better than previously thought. These differences may reflect the changing clinical environment and the emergence of new therapeutic options. We did not find association of adverse pregnancy outcomes with lupus nephritis.

In univariate and multivariate analysis, lupus flare in pregnancy was found to be related to adverse pregnancy complications of IUGR, PIH, or both in our patients, consistent with previous reports [5]. Most studies have shown that lupus tends to flare during pregnancy and after pregnancy; in some patients flares were mild such as arthritis, constitutional and cutaneous manifestations, and in others they were more serious problems affecting the kidneys and central nervous system [5,6,18]. The severe types of lupus flare were occurred more frequently when women with SLE were at active disease status before conception in our study.

Our study demonstrated that aPLs were related with pregnancy loss and premature birth in univariate and multivariate analysis. The aPLs are the major risk factor for pregnancy loss in patients with SLE and in those with primary antiphospholid antibody syndrome. These antibodies play a direct pathogenic role not only by aPL-mediated thrombophilia of the placenta, but also by the direct effect of antibodies on trophoblast possibly through exposed anionic phospholipids and/or adherent β2 glycoprotein, resulting in altered trophoblast intercellular fusion, gonadotropin secretion and trophoblast invasiveness [19]. A previous study has shown that positive aPLs are predictive of both premature births and pre-eclampsia, but not of pregnancy loss [20]. We can speculate that aPLs are stronger risk factors for pregnancy loss than disease activity at conception, because disease activity did not reach statistical significance on pregnancy loss in multivariate analysis.

Over the last decades, improvement of survival rate and quality of life in SLE patients has led to an increased number of pregnancies observed during the course of the disease.

However, it has been reported that if SLE is active at conception, then the patient has a high risk of having a disease flare during pregnancy; if the disease is in remission then the risk is reduced [21]. Pregnancy should therefore be planned when SLE is in remission [9]. So, some rheumatologists say that the risk of flare seems to depend on the level of maternal disease activity in the 6-12 months before conception [10].

However, there is lack of reports about the stable or remission period before the trial of pregnancy to decrease adverse pregnancy outcome. Even though fertility is generally conserved in SLE patients, the timing for the trial of pregnancy can be challenge, because maternal age at marriage and first birth in general population is getting older not only in high-income countries but also middle-income countries in Asia where social activity of women is getting higher and social supporting system is not enough yet. Older women are more likely to experience fertility problems and require assisted reproductive technology (ART) to conceive. Impact of assisted fertilization on disease activity has to be evaluated also [8]. A trial and achievement of pregnancy is associated not only disease status but also social, cultural, economical factors, and so on. So, it is important when the women with SLE can start the trial of pregnancy.

Based on our results, pregnancy loss, premature birth and pregnancy complications including IUGR, PIH, or both were reduced significantly if pregnancy occurs after more than 4 months of stable period in women with SLE.

Our study has several limitations. We evaluated observational data, and therefore the treatment strategy was not based on randomized assignment. Also, we could not observe all immunologic data we planned from the all patients. However, this is a large observational data in the East Asian pregnant women with SLE and we found cut-off stable time period of disease activity before the trial of pregnancy to decrease adverse pregnancy outcomes.

In women with SLE, the present study showed that the stable group according to disease activity at conception was superior to the active group in terms of success rate of fetal survival, full-term delivery, body weight of neonate, complication of IUGR or PIH, and SLE flare of the mother, indicating the important role of the physicians in consulting patients with SLE for the timing of pregnancy.

We conclude that in order to achieve favorable pregnancy outcomes it is essential that disease activity remains stable at least 4 months at the time of conception, and that pregnancy is managed by experienced rheumatologists and obstetricians.

We declare that there are no conflicts of interest and that the study has met institutional review board approval. The study has not been previously published in any form or shape.