Impairment of Pulmonary Function is an Independent Risk Factor for Atrial Fibrillation: The Takahata Study

Background: Chronic pulmonary disorders, such as chronic obstructive pulmonary disease (COPD) and fibrosing lung diseases, and atrial fibrillation (AF), are prevalent in elderly people. The impact of cardiac co-morbidities in the elderly, where pulmonary function is impaired, cannot be ignored as they influence mortality. The relationship between the prevalence of AF and pulmonary function is unclear. The aim of this study was to evaluate this relationship in participants in a health check.

Methods: Subjects aged 40 or older (n = 2,917) who participated in a community-based annual health check in Takahata, Japan, from 2004 through to 2005, were enrolled in the study. We performed blood pressure measurements, blood sampling, electrocardiograms, and spirometry on these subjects.

Conclusion: Impaired pulmonary function is an independent risk factor for AF in the Japanese general population.

Long-term cigarette smoking causes respiratory airway injury and results in pulmonary diseases such as chronic obstructive pulmonary disease (COPD) and lung cancer (1). COPD is characterized by airflow limitation that is not fully reversible; post-bronchodilation forced expiratory volume in 1 second (FEV1)/ forced vital capacity (FVC) < 70% (2). In Japan, it is estimated that 10% of the general population have COPD (3), most of whom are undiagnosed because patients with mild or moderate COPD show less clinical symptoms, such as dyspnea, cough, and sputum. Recently, the clinical phenotype of COPD was suggested to be associated with chronic inflammation, not only in the lung, but in the whole body, resulting in various co-morbidities such as unexplained cachexia, osteoporosis, and diabetes mellitus (4). As we previously demonstrated, differences in genetic backgrounds in COPD patients are involved in this exaggerated inflammatory response (5-7).

Coronary artery disease is one of the most well-known co-morbidities seen in COPD patients (8), and is a risk factor that influences mortality associated with this disease. In addition, serum levels of B-type natriuretic peptide (BNP), a marker of congestive heart failure (9), are reportedly, significantly elevated in COPD patients (10), and COPD patients frequently have cardiac disease (8). Consistent with this, left ventricular filling is reportedly impaired in patients with pulmonary emphysema (11).

Atrial fibrillation (AF) is one of the most common arrhythmias. The incidence of AF is higher in the older generation (12,13), and its prevalence accordingly increases with a shift to the aging population (14). As with COPD, the development of AF is thought to be involved in systemic inflammation (15), and known risk factors are aging (16,17), cardiac disease (18), hypertension (19), obesity (20), smoking (21,22), and hypoxia (23). A couple of cohort studies on the relationship between AF and COPD are available (24-26), however, their conflicting results make any conclusions difficult.

We assessed the findings of electrocardiograms and spirometry in Japanese subjects who participated in a community-based annual health check-up. We evaluated the association of AF and impaired pulmonary function in this population.

This study formed part of the Molecular Epidemiological Study utilizing the Regional Characteristics of 21st Century Centers of Excellence (COE) Program and the Global COE Program in Japan. Details of the study methodology have been described elsewhere (29). This study was approved by the institutional ethical committee and all participants gave written informed consent.

This study utilized a community-based annual health check, in which all inhabitants of Takahata town (total population 26,026) in northern Japan, who were aged 40 years or older, were invited to participate. This region has a resident population of 15,222 adults, aged 40 or older (7,109 males and 8,113 females). Since employees in public institutes and in many companies are examined annually in health check programs organized by the local health centers, they usually do not participate in the health check held by their local government, such as Takahata town. The local government-organized health check covers farmers, employees of small companies, self-employed persons, housewives and retirees. Four thousand two hundred and eighty-two adults aged 40 years or older participated in this health check program from June 2004 through November 2005, and 1,380 males and 1,735 females (a total of 3,165 subjects) agreed to be enrolled in the study. Two hundred and forty-eight subjects were excluded from the analysis due to spirometry data that did not meet the Japanese Respiratory Society (JRS) criteria (30). Data for a total of 2,917 subjects (1,325 males, 1,592 females) were entered into the final statistical analyses.

Subjects used a self-reporting questionnaire to document their medical histories, smoking habits, current medications, and clinical symptoms. In the questionnaire, 2.2% of subjects reported a history of respiratory disease, although the details were not known. Brinkman index [inhaled cigarettes /day × duration of smoking (years)] was used as an estimate of the amount of inhaled cigarettes in the subject's life.

Systolic and diastolic blood pressures were measured with a mercury manometer, and placed on the right arm of seated subjects who had rested in a sitting position for at least 5 min before measurement. This was carried out twice, and the mean value was used for statistical analysis. Fasting blood samples were collected from the antecubital vein with the subject in a sitting position, and samples were transferred immediately to chilled tubes. Immediately following serum isolation, laboratory examinations were performed. Of the 2,917 participants, data on serum BNP levels were available in 2,906 subjects. The remaining serum was stored at -80°C. High sensitivity C-reactive protein (HS CRP) levels were measured in 2010 in the stored serum samples with sufficient volume (1,206 serum samples).

Chest X-ray findings and the final diagnosis of each subject were unavailable in the database of this study.

The Mann-Whitney U test for non-parametric data was used to analyze differences between two groups. Fisher's exact test was used to evaluate differences in proportions. These comparisons and the logistic regression analyses were performed using JMP version 8 software (SAS Institute Inc., Cary, NC, USA). Data in the figures are shown as mean ± SD. Significance was inferred for differences with P < 0.05.

Characteristics of the subjects are summarized in Table 1.

The characteristics of study subjects with and without atrial fibrillation (AF), as determined by electrocardiogram 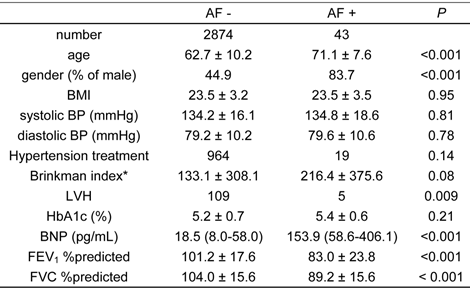 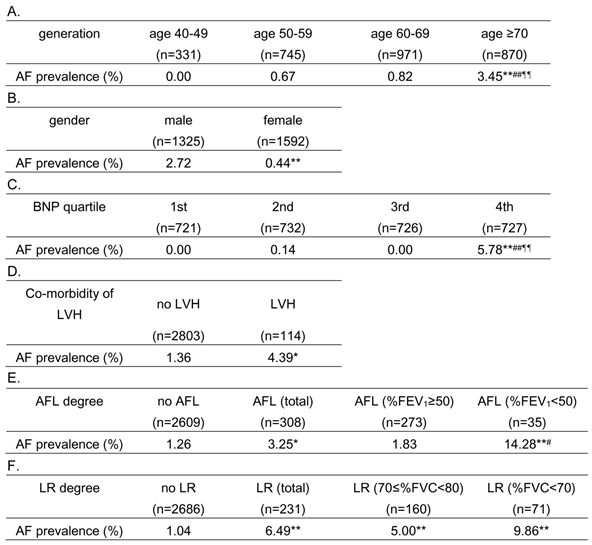 Table 5 summarizes pulmonary function of the subjects relative to presence of AF. All spirometric values (FEV6 %predicted, FEV1/FVC, FEV1/FEV6, FEF25-75 %predicted, V75 %predicted, V50 %predicted and V25 %predicted) were significantly lower in subjects with AF than in those without. 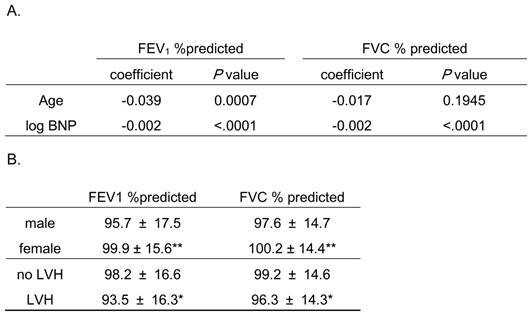 Because the distribution of BNP was highly skewed toward the larger values, the logarithm-transformed BNP was used in this analysis. 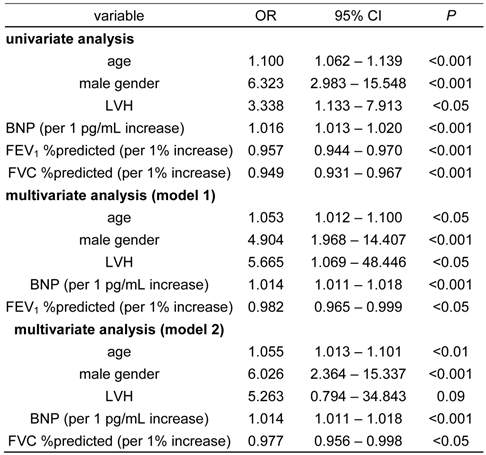 Comparison of spirometric measurements on subjects with and without atrial fibrillation (AF), as determined by electrocardiogram.

Data are expressed as mean ± S.D. 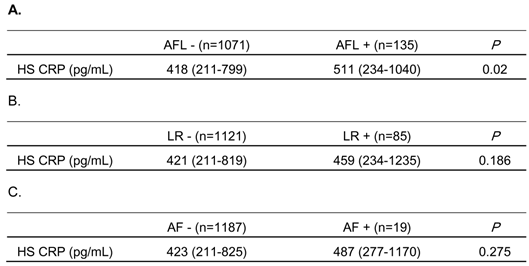 In this study, mean FEV1 %predicted and FVC %predicted in AF subjects were significantly lower than in non-AF subjects. AF prevalence was higher in those subjects with airflow limitation or lung restriction than those without. Furthermore, the prevalence of AF was higher in those subjects who had severe airflow obstruction (FEV1 %predicted < 50) compared to those with mild or moderate airflow obstruction (FEV1 %predicted ≥ 50). Multiple logistic regression analysis revealed that both FEV1 %predicted, representing the degree of airflow limitation in COPD patients, and FVC %predicted, representing the lung size of the subjects, were independent (from age, male gender, the co-morbidity of LVH, and BNP levels) risk factors for AF.

Coronary artery disease is a frequent co-morbidity in patients with COPD. Many of our subjects with airflow limitation were suggested to have COPD, as this disease is one of the major causes of airflow limitation in Japan. However, since the relationship between AF and reduced pulmonary function was independent of serum BNP levels, which is a well-known marker of cardiac damage, it was not likely that cardiac damage induced by chronic respiratory disease was a primary factor in AF development. The mechanisms involved in the relationship between AF and reduced pulmonary function are suggested to be: 1) hypoxia, 2) elevation of pulmonary pressure, and 3) chronic inflammation.

First, subjects with severely-impaired pulmonary function may have hypoxia. Hypoxia reportedly induces sympathetic drive, resulting in the incidence of AF (33). This may be one of the mechanisms whereby AF is induced in subjects with airflow limitation. Unfortunately, PaO2, measured by arterial blood gas analysis, and oxygen saturation, measured by pulse oximetry, were not assessed in this health check program, as it was not hospital-based clinical research. However, as shown in Table 2E and 2F, the finding that the prevalence of AF was much higher in the group with severely impaired pulmonary function, supports this hypothesis.

Third, chronic systemic inflammation is reported to be involved in the pathogenesis of some chronic respiratory disease, such as COPD and bronchial asthma (4,36). Circulating pro-inflammatory cytokines, such as interleukin-6 and tumor necrosis factor-alpha, are elevated in such patients (36). Recently, the involvement of systemic inflammation was also suggested in the pathogenesis of AF (15). Anatomically, the pulmonary circulation flows directly into the left atrium through the pulmonary vein where the trigger for AF is initiated. Thus, chronic inflammation originating from the lung may trigger AF. In this study, we measured HS CRP (an indicator of systemic inflammation) in some of the subjects. We showed no significant difference in HS CRP levels in AF and non-AF subjects. However, only 1,206 serum samples out of a total of 2,917 subjects were available for this assay. Furthermore, there were only 19 samples from subjects with AF. Therefore, a larger sample number may be required to prove the involvement of chronic systemic inflammation in the mechanism of AF development in subjects with reduced pulmonary function.

The details of airflow limitation and lung restriction in this study population were not specified because, 1) the self-reporting question on the history of respiratory disease only required a yes/no answer, 2) there was no information on chest X-ray findings or, 3) the final diagnosis. COPD and bronchial asthma are the most likely cause of airflow limitation in this study population (3,37). The prevalence of fibrosing lung diseases is not as high as COPD and bronchial asthma. Even the prevalence of idiopathic pulmonary fibrosis, one of the most common fibrosing lung diseases, is estimated to be only 3.44 per 100,000 people in Japan (38). As we previously demonstrated, FVC %predicted in the general Japanese population was inversely associated with the pack-years of cigarette smoking (27). Thus, although the precise etiology of lung restriction is unclear, the habit of cigarette smoking may play an important role in reduced FVC values.

Another possible limitation in this study was sampling bias. Twenty-eight percent of adults aged 40 years or older came to receive this health examination, organized by Takahata town, and 74% of these were enrolled in this study. Workers in the public institutes and many companies did not participate in this research due to reasons described in the Methods. We cannot deny the possibility that the difference in jobs or life-styles between participants and non-participants may affect the results of this research.

In conclusion, we demonstrated that impaired pulmonary function is an independent risk factor for AF in the general Japanese population. There were, however, some study limitations, such as sampling bias and lack of data for blood oxygen, pulmonary artery pressure, and details of respiratory diseases in the subjects. Physicians should pay attention to the status of pulmonary function in patients with AF. Early intervention for hidden chronic lung disorders, such as COPD, may improve the prognosis of AF patients.

We thank Taiko Aita and Eiji Tsuchida for their excellent technical assistance.

Funding: This study was supported by a Grant-in-aid from the Global COE program of the Japan Society for the Promotion of Science, and grants-in-aid for Scientific Research from the Ministry of Education, Culture, Sports, Science and Technology, Japan (19590880, 20590892, and 23390220).

Ethics approval: This study was approved by the institutional ethics committee and all participants gave written informed consent.