Results Ninety patients were involved in the study. One patient from Group B did not have their scheduled surgery; eighty-nine patients completed the study. There were no significant differences in the patient demographics between the three groups. Visual analog scales: 1, 2, 4 h for Group A was significantly higher than Groups B and C (P<0.05); Sufentanil administration during surgery: Group C was obviously lower compared to Groups A and B (P<0.05); 24 h satisfaction score: Groups B and C were higher than Group A (P<0.05).

This prospective, double-blind, randomized study was approved by the Ethics Committee of the Harbin Medical University and informed consent was obtained from the patients prior to study enrollment. Ninety patients undergoing elective thyroid gland surgery were involved in this study.

The inclusion criteria were: 1) ASA physical status I or II patients undergoing elective thyroid surgery; 2) aged 30-60 years. The exclusion criteria were: 1) patients who had received nonsteroidal anti-inflammatory drugs (NSAIDs), opioid or drugs with known analgesic properties in the 24 h before surgery; 2) patients with a history of allergic reaction to local anesthetics, opioid, NSAIDs; 3) patients with any contraindications for the use of NSAIDs, such as: gastrointestinal ulcer, coagulation disorders, renal dysfunction, heart failure and ischemic heart disease; 4) patients unable to comprehend the concept of the visual analog pain scale (VAS). All of the patients were instructed the day before surgery about the study protocol and particularly about the use of VAS. No premedication was given, and all the patients fasted from midnight before surgery.

On arrival at the operating room, patients received 2-3 mg intravenous midazolam. The standard monitors, including pulse oximetry, electrocardiography, and noninvasive arterial blood pressure, were applied. Patients were randomized to treatment groups A (Control), B (Routine analgesia), or C (Preemptive analgesia) in a sequence generated by a computerized random number generator and sealed in numbered, opaque envelopes. The envelopes contained two 5-mL syringes, labeled “pre” and “post,” with the contents blinded to anesthesiology, surgeons, operating room staff, recovery room staff, and the patient until the study was completed. Group A (Control) received Intralipid® 2 ml as a placebo 15 min before the cervical plexus block and at the end of the surgery; Group B (Routine analgesia) received a placebo 15 min before cervical plexus block and flurbiprofen axetil 50 mg (2ml) at the end of surgery; Group C (Preemptive analgesia) received intravenous flurbiprofen axetil 50 mg 15 min before the cervical plexus block and a placebo at the end of the surgery.

Bilateral combined superficial and deep cervical plexus block with 0.5% ropivacaine was given in all the cases. A deep cervical plexus block was performed by using a 23-gauge, short beveled needle (Pole, Top, Japan). It was inserted behind the lateral border of the sternocleidomastoid muscle, 3 cm distal to the mastoid process. After negative aspiration for blood, 8 mL of solution was injected. The same needle was also used in a superficial cervical plexus block, and it was inserted at the midpoint of the sternocleidomastoid muscle, corresponding to the C3 transverse apophysis. After negative aspiration for blood in three directions, 4.5 mL of the solution was injected up and down at the posterior border of the sternocleidomastoid muscle to block the occipital, auricular, and supraclavicular branches of the superficial cervical plexus and 1.5 mL was injected horizontally above the muscle to block the transverse cervical nerve. Mean arterial blood pressure was maintained within 20% of the baseline values, in which additional boluses sufentanil were given in incremental doses of 1-2μg when necessary. All surgical and anesthetic procedures were performed by the same teams.

Postoperative pain management was standardized as follows: For postoperative pain relief, tramadol was administered in increments of 50 mg on patient demand with a lock-out time of 4 h and a maximum dose of 300mg/day. One ward nurse, who was blinded to group allocation, documented the postoperative pain intensity using VAS at the first rescue analgesics request, and at 1, 2, 4, 6, 8, 12, and 24 hours after surgery at rest. The time to the first request and the number of times tramadol was used in the first 24 hours after surgery were recorded. If the patients experienced severe nausea and vomiting, 10 mg metoclopramide iv was administered. Sufentanil consumption during surgery and 24 h 4-point rating scale satisfaction score (0 very unsatisfied, 1 unsatisfied, 2 satisfied, 3 very satisfied) on analgesic therapy were both recorded blindly by one of the authors. Side effects related to the regional anesthetic technique, such as cervical epidural analgesia and diaphragmatic palsy, were recorded. Particularly, patients were clinically evaluated by an experienced anesthesiologist for respiratory distress related to bilateral diaphragmatic palsy at recovery and in the PACU. Should this occur, dynamic chest radiograph examination would be performed to ascertain the diagnosis. Other side effects associated with flurbiprofen, such as vomiting and antiemetic requirements, were recorded.

Statistical analyses were performed using a statistical software package (SPSS13.0, Chicago, IL). Data were analyzed by the analysis of variance (ANOVA) with repeated measures, using one dependent variable on the time course. Analysis of the categorical data and proportions was performed using the χ2 test. The differences between the two groups were evaluated using the Student t test, Mann-Whitney rank sum test, and Fisher exact test, where appropriate. P<0.05 was considered significant. The sample size was calculated to detect a difference of 2.0 in pain intensity on a visual analogue scale (VAS 0-10). Based on the assumption of a standard deviation of 2.0, we calculated a sample size of 20 patients per group. This number would be sufficient to find the mentioned clinical endpoint with a power of 0.89 as statistically significant.

Ninety patients were involved in the study. One patient from the group B did not have her scheduled surgery; eighty-nine patients completed the study. The demographic characteristics and intraoperative data of the three groups are presented in Table 1. There were no significant differences in the patient demographics between the three groups. In addition, pulse oximetry, heart rates, blood pressures, blood loss, and fluid administration during surgery were not statistically different between the groups (P>0.05).

Characteristics of the Patients

There were no significant differences between the demographic variables for the groups. Data are mean ± SD or n.

No patient showed any adverse effect associated with FA and there were no surgical complications.

Visual analog pain scale, patients rated their levels of pain on the 0-10 cmVAS (0 cm = no pain to 10 cm = the worst possible pain). * P<0.05 Preemptive analgesia and routine analgesia group versus the control group. 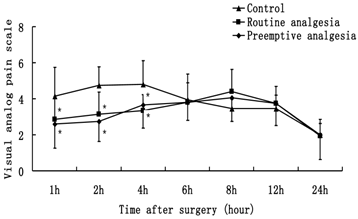 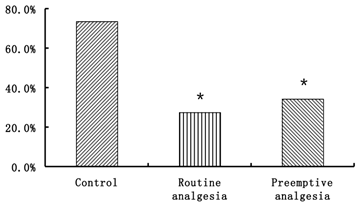 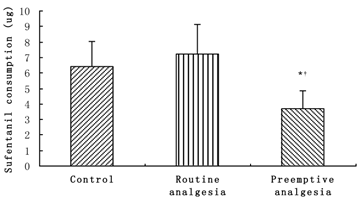 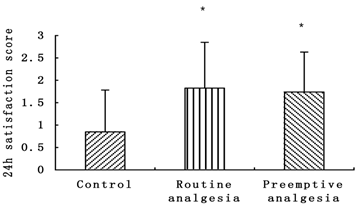 The present results indicate that preoperative FA provides less sufentanil consumption during surgery, better immediate postoperative analgesia than placebo. But, compared to patients receiving FA at the end of surgery, there is lack of preemptive analgesia effect.

Some authors have suggested that the effects of preemptive analgesia may vary according to the type of surgery.20 Whether preemptive analgesia can be effective depends on the prevention of the establishment of central sensitization. In some kinds of surgery, such as fracture, spinal disc herniation, appendicitis, and acute or chronic pain already exist. Under these clinical conditions, we can easily notice that central sensitization has already been established by presurgical pain.21 To avoid this condition, we chose thyroid gland surgery, which is not to be studied in preemptive analgesia research and there is no presurgical pain.

There are two phases - incisional and inflammatory (reaction to the damaged tissue) - in surgery-induced central sensitization. It is suggested that as inflammatory injury plays dominant role, antinociceptive protection provided by preemptive treatment should extend into the postoperative period to cover the inflammatory phase; otherwise, it is ineffective as in the rat paw incisional model.1 The analgesic effect of FA would begin 30 min after administration, with an elimination half-life of 6 h.12 We administered FA 15 min before a cervical plexus block in order to make sure that the analgesic effect of FA before the incision and lasted throughout the operation. The analgesic properties of FA can be attributed to their inhibition of COX and the subsequent decrease in prostaglandins in the periphery.23

A nerve block is one of the modalities of preemptive analgesia studied.24 All patients in the present study, irrespective of the group assignment, received a cervical plexus block before surgery. Probably due to this treatment, the mean pain score was never above 6 (Fig.1). However, the present study did not compare the efficacy of a cervical plexus block as a preventive analgesia and studied only the possible benefits of FA.

The NSAIDs are associated with many adverse effects, including reducing platelet aggregation, renal and gastrointestinal mucosal injury. However, in this study, there was no difference of intraoperative or postoperative blood losses between three groups. Also, no adverse effects on renal and gastrointestinal mucosal injury were found in any of the patients. That may be because of the only single dose infusion. These results are similar to other studies9-11.

There are several limitations of the present study. Cervical plexus block may influence the results. Psychosocial characteristics, educational background and preoperative pathology of the patients were not controlled in this study.

This work was supported by the grants from the outstanding youth science foundation (No. JC2007716), the Science and Technique foundation (No. GC06C410) and the important research project of education bureau of Heilongjiang Province of China (NO. 1152hz33).

There is no potential conflict of financial interests in this study.