Spontaneous uterine rupture is lethal in pregnant women. Placenta percreta-induced spontaneous uterine rupture in the first trimester is extremely rare and difficult to diagnose. A 35-year-old pregnant woman, with a history of 2 vaginal deliveries and 2 spontaneous abortions treated by dilatation and curettage, was admitted to the emergency department because of sudden severe abdominal pain; the gestational age as calculated by sonography was 14 weeks. Diagnostic laparoscopy was considered for surgical abdomen and fluid collection that was noted in sonography. During laparoscopy, uterine rupture with massive bleeding was detected; therefore, total abdominal hysterectomy was performed. The patient was discharged without any complications. Pathological analysis of the uterine specimen revealed placenta percreta to be the cause of the rupture. Uterine rupture should be considered in the differential diagnosis in all pregnant women who present with acute abdomen, show fluid collection in the peritoneal cavity. In addition, we recommend laparoscopy for the investigation of acute abdomen with unclear diagnosis in the first trimester of pregnancy.

Uterine rupture due to placenta percreta is very rare, with an incidence of 1 in 5,000 pregnant women [1]. It often occurs in patients with a history of Cesarean section [2].

Based on our review of medical literature, spontaneous uterine ruptures mainly occur during the second or third trimester; its occurrence in the first trimester is extremely rare and in such cases, has a catastrophic outcome due to massive hemorrhage [2, 3].

Here, we report the case of a pregnant woman who suffered from a spontaneous uterine rupture due to placenta percreta at 14 weeks of gestation.

A 35-year-old pregnant woman (gravida 5, para 2), with a history of 2 vaginal term deliveries and 2 spontaneous abortions treated by dilatation and curettage, was admitted to the emergency department because of sudden severe abdominal pain. At admission, the gestational age was calculated to be 14 weeks by sonography (Fig. 1); she had not received any antenatal care. During physical examination, abdominal tenderness was noted; in addition, her blood pressure was 110/60 mm Hg; heart rate, 98 beats/min; and body temperature, 36.1°C.

Ultrasound examination revealed moderate accumulation of free fluid in the peritoneal cavity. In addition, the placenta was located at the upper anterior uterine wall, the fetal heart rate was 171 beats/min, and uterine contractions were absent. Laboratory analysis showed a hemoglobin level of 10.3 g/dl and an elevated white blood cell count of 17550 cells/mm3. Because the pregnancy was intrauterine and not otherwise, our initial clinical impression was appendicitis; however, in the absence of fever, the diagnosis of appendicitis could not be confirmed. To diagnose the cause of continuous severe abdominal pain, we decided to conduct diagnostic laparoscopy to exclude appendicitis, cholecystitis, and peritonitis.

At the time of laparoscopy, 800 ml of fresh blood and 0.5-cm fundal defect of the uterus were noted (Fig. 2). The placenta and amniotic membrane were seen bulging spontaneously and slowly, and the uterine defect was gradually enlarging, with its size increased to 3 cm as last noted. Because the amount of blood in the ruptured area increased rapidly, we decided to convert laparoscopy to laparotomy. At the beginning of the laparotomy, the fetus was spontaneously delivered through the ruptured site. We preferred total abdominal hysterectomy to conservative management because of the large, fragile, and thin uterine wall with abundant blood vessels on the surface. The total estimated blood loss during the operation was 1000 ml; the patient was transfused 4 units of packed red blood cells and 2 units of fresh frozen plasma. Her recovery was uneventful, and she was discharged on postoperative day 6. The final pathological examination revealed that the chorionic villi had invaded the entire myometrium up to the serosa, confirming the diagnosis of placenta percreta (Fig. 3). The length of the fetus measured from the crown to rump was 9.0 cm, and fetal weight was 69.3 g; these measurements were consistent with 14 weeks of gestation. 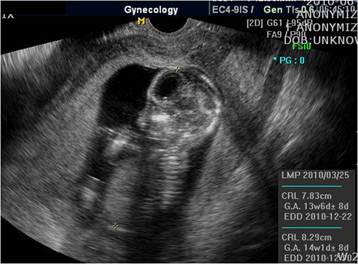 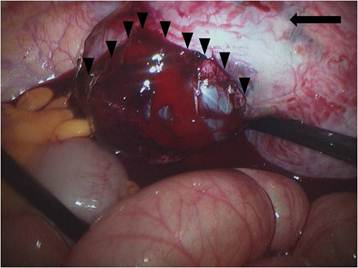 Chorionic villi in the myometrium of uterus, which explains the placenta percreta, are noted at microscopic field (x 40). 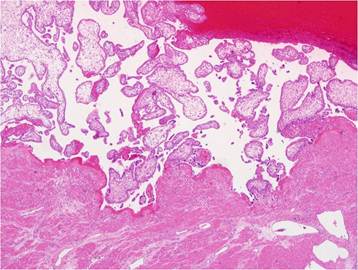 Placenta percreta-induced uterine rupture in the first trimester in our patient may be attributed to the previous dilatation and curettage. Placenta percreta is the rarest form of placental abnormalities, with a 5-7% incidence among all placenta accreta cases [4]. In placenta percreta, the decidua basalis is partially or completely absent, and the chorionic villi invade the entire myometrium up to the serosa [5].

Fluid collection during pregnancy is sometimes considered insignificant if the vital signs are stable; however, fluid collection in the peritoneal cavity along with acute abdomen should be evaluated for the differential diagnosis such as appendicitis and hemoperitoneum. The gradual increase in the size of the uterus with advancing pregnancy can cause a delay in the diagnosis and appropriate treatment. The first laparoscopic surgery during pregnancy was cholecystectomy, performed in 1991 [14]. Thereafter, laparoscopy has been widely used in pregnant women for the differential diagnosis of acute abdomen such as appendicitis, cholecystitis, or adnexal masses [15]. In addition, laparoscopic surgery during pregnancy is regarded safe [14, 16]. Hence, in vague and emergent conditions, such as in the case of our patient, laparoscopy can be helpful for the early diagnosis of hemoperitoneum due to uterine rupture.

In general, the area of placenta percreta-induced uterine rupture exhibits more vascularization than the site of previous scar-induced rupture; therefore, uterine rupture caused by placenta percreta can be more dangerous than that caused by a previous scar [13]. Total hysterectomy is considered in the case of life-threatening severe bleeding or insufficient hemostasis [13, 17].

Conservative treatments for placenta percreta-induced uterine rupture have been reported, such as uterine curettage along with packing, adjuvant chemotherapy, and bilateral uterine vessel occlusion [18, 19]. However, considering a 4-fold mortality rate associated with these conservative treatments as compared to hysterectomy, the latter is usually preferred in an emergent situation [5].

In conclusion, this report highlights the significance of a history of spontaneous abortion treated by dilatation and curettage in uterine rupture caused by placenta percreta. Uterine rupture should be considered in the differential diagnosis in all pregnant women who present with acute abdomen, show fluid collection in the peritoneal cavity, and have specific risk factors, even during the first trimester. In addition, we recommend laparoscopy for the investigation of acute abdomen with unclear diagnosis in the first trimester of pregnancy.