Neurocysticercosis, caused by Taenia solium, is the most common parasitic infection affecting the central nervous system. However, the spinal cysticercosis is rare, representing 1.2% to 5.8% of all cases of neurocysticercosis19, 20. According to the cysticercus location in spine, Cysticercosis has been classified anatomically as extraspinal (vertebral) or intraspinal (epidural, subdural, arachnoid, or intramedullary), of which the intramedullary type is quite rare and only fifty-three cases have been reported until 20101-3,8,13. Here, we reported a case of intramedullary cysticercosis at T4 and T5 vertebral level and discussed its diagnosis and treatment with literature review.

A 40-year-old female patient was transferred to our department from a local hospital for progressive weakness in both lower limbs for one month, and anal sphincter and bladder dysfunction for two days. Neurological examination disclosed spastic paraparesis with decreased motor power of grade 3/5 in both lower limbs, impaired sensations below T4 dermatome, brisk tendon jerks and positive Babinski signs on both sides. Non-contrast MRI revealed two well-defined round intramedullary cystic lesions at T4 and T5 vertebral levels, which were homogeneously hypointense on T1WI and hyperintense on T2WI with slightly peripheral edema. The subarachnoid space from T4 to T5 was narrow due to the marked expansion of spinal cord. There were no abnormalities at cervical or lumbar levels or within the brain parenchyma. The diagnosis of intramedullary mass lesion was made. There is no use of dexamethasone in the perioperative period.

The patient underwent laminectomy from T4 to T5, and the spinal cord was found swollen. When a midline myelotomy was performed, a white cystic lesion was seen and clear fluid was then aspirated. The cyst wall of which slightly stuck to the surrounding spinal cord. In order to dissect the cyst with minimal injury to the peripheral tissue, the cystic liquid was partly withdrawn first and the slackened cyst was removed totally. The liquid was yellowish and transparent. Histological examination of the resected sample showed cysticercosis. 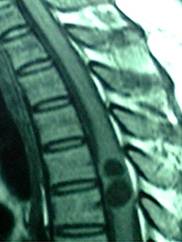 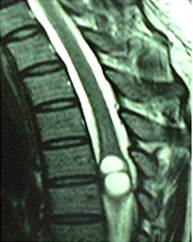 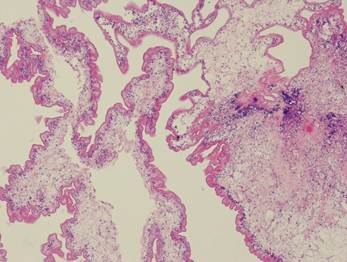 Cysticercosis is widely endemic in Brazil, Peru, Mexico, Korea and India19-20. Intramedullary cysticercosis often presents in the patients between 20 to 45 years old, with the youngest one 5 years old and the oldest one 45 year's old15. Most patients experienced a progressively worsened course from a week to 10 years20. The common clinical manifestations included pain, paraparesis, spasticity, bowel and bladder incontinence, and sexual dysfunction1,20. However, inflammatory reaction against the dead parasite is associated with perilesional edema, which can damage medullar parenchyma and therefore, worsen symptoms2. Inside the spinal cord, cysticercus usually distributes in the thoracic cord, with a few cases involving the cervical and the lumbar cord. This distributional mode of cysticercus supports the hypothesis that intramedullary cysticercus comes from the blood circulation, because thoracic cord has much more blood supply than the other parts of the spinal cord6,20. However, it is also thought that intramedullary cysticercus could migrate to the spinal cord via the ventriculo-ependymal pathway. On MRI, intramedullary cysticercosis usually show a cystic lesion within the spinal cord, which of appears hypointense on T1WI with hyperintense scolex identified inside the cyst cavity, hyperintense on T2WI in vesicular stage, a subtle hypointense rim may surround the intramedullary cyst on T2WI. In the colloidal stage the thickened cyst capsule is hyperintense on T1WI and hypointense on the T2WI. Cyst contents appear hyperintense on T1WI resulting in scolex is not seen. There is an amount of surrounding edema. If cyst degeneration is present peripheral ring enhancement may be present1,2,15,17. The differential diagnosis of an intramedullary cystic lesion is extensive, including some other cysts such as arachnoid cyst14, ependymal cyst10, neurenteric cyst18, sarcoidosis4, neoplasms such as ependymoma, and infections such as abscess21.

When a patient had a history of cysticercosis or came from an endemic region and MRI revealed a cystic spinal cord lesion, the diagnosis of intramedullary cysticercosis could be suspected and be further verified by serologic alterations, subcutaneous nodules, and changes in the cerebrospinal fluid. The CSF examination often shows increased proteins, a low or normal glucose, moderate lymphocytic pleocytosis and eosinophilia7. Cysticercal antibodies found in CSF either by ELISA or in serum by enzyme-linked immunoelectric transfer bolt assay have good sensitivity and specificity in cysticercosis diagnosis7,22. However, the patient lacked of neurocysticercosis history and was not from an endemic region. Therefore, it was difficult to clinically suspect intramedullary cysticercosis prior to treatment. The diagnosis of neurocysticercosis was established based on pathological examination. In our case, owing to increasing neurological deficit, surgical treatment is a good choice for removing the mass which produces progressive spinal compression and confirm the diagnosis. Our patient showed improvement in motor power. Bowel movements and urinary sphincters was better control. However, the results of surgical outcome are mixed. Mohanty16 reported only a 75% satisfactory outcome after surgery and cysticidal treatment. Early diagnosis and treatment can improve the outcome. Outcomes reported in other series have not been favorable. Sharma1 reported that 60% patients acquired improvement after surgery, 25% did not improve, and 15% died. In the reports published in recent years1,2,9,12,15, surgical outcome was significantly improved; no death case and majority of patients could live a life without special support. Surgery is procedure of choice only when diagnosis is in doubt otherwise medical treatment has its advantages. Albendazole is a medicine that has been proved to be effective in the patients with intramedullary cysticercosis since 19965. Preoperative adjunctive treatment with albendazole is thought to be helpful to consolidate the lesion and thus induce a clear plane of dissection during surgery. Albendazole is normally used postoperatively as a regular treatment (15mg/kg/day) for 4 to 6 weeks, according to the idea that cysticercosis is a generalized disease with focal manifestation. Moreover, Albendazole is often used with corticosteroids, because its blood level could be synergistically increased by the latter11. Except for being used after surgery, Abendazole also could be used independently in the conservative treatment for the patients whom are highly suspected as intramedullary cysticercosis and whose clinical courses are stable. The potential advantages of medical therapy alone include avoidance of surgery and treatment of surgically unreachable and multifocal cysticercus2,3,5,7,17.

In conclusion, we think that intramedullary cysticercosis represents a diagnostic challenge and neurocysticercosis should also be strongly considered for intramedullary cystic lesions, even in a non-endemic area. Surgery is required to facilitate extirpation of the lesion, decompress the cord, confirm the pathological diagnosis and provide a route for definitive therapy.