The Association Among Lipoprotein-associated Phospholipase A2 Levels, Total Antioxidant Capacity and Arousal in Male Patients with OSA

Background: The mechanisms of the increased cardiac and vascular events in patients with OSA are not well understood. Arousal which is an important component of OSA was associated with increased sympathetic activation and electrocardiographic changes which prone to arrhythmias. We planned to examine the association among arousal, circulating Lp-PLA2 and total antioxidant capacity in male patients with OSA.

Methods: Fifty male patients with newly diagnosed OSA were enrolled the study. A full-night polysomnography was performed and arousal index was obtained. Lp-PLA2 concentrations were measured in serum samples with the PLAC Test. Total antioxidant capacity in patients was determined with Antioxidant Assay Kit.

Conclusions: This study demonstrated a moderate linear relationship between arousal and LP-PLA2 levels. Also, total antioxidant capacities were decreased in the higher arousal index. Based on the study result, the patients with higher arousal index may be prone to vascular events.

Obstructive sleep apnea (OSA) is independently related with increased risk for hypertension, ischemic stroke, and myocardial ischemia [1-3]. The mechanisms of the increased cardiac and vascular events in patients with OSA are not well understood. Arousal, in the absence of hypercapnia or hypoxia, has been reported to be associated with an acute increase in sympathetic activity [4]. Arousals from sleep are associated with acute surges in blood pressure and heart rate [5-7]. The repeated arousals from sleep that occur in OSA may contribute to the increased risk of developing hypertension [1, 8], with the mediating factor being the frequent, acute cardiovascular insults [9]. Arousal was also related with electrocardiographic changes at the RR, QT and PR intervals [10-12].

Patients who were referred to the Sleep laboratory for evaluation of sleep-disordered breathing between April 2009 and January 2010 were prospectively screened for the study. Fifty male patients with newly diagnosed OSA were enrolled to the study but women are not included in this study. OSA was defined as an apnea-hypopnea index (AHI) of ≥5 obstructive events per hour of sleep. The patients who did not meet exclusion criteria's were consecutively enrolled the study. Patients with hypertension, coronary artery disease, heart failure, a history of stroke, diabetes mellitus, chronic obstructive or restrictive pulmonary disease, chronic renal disease, dyslipidemias, pharmacologically treated depression, and tobacco use within the past 10 years were excluded from the study. In addition, nightshift workers and patients receiving medications or nutritional supplements were ineligible for the study. The Selcuk University Ethic Committee approved the study and written informed consent was obtained from all study participants.

At least one full-night polysomnography (PSG) was performed by using Compumedics E-series Sleep System, (Compumedics, Melbourne, Australia). Electroencephalography (EEG), submental electromyography (EMG), leg EMG, electrooculography (EOG), and electrocardiography (ECG) recordings were obtained; air-flow was measured using both a nasal cannula (NC) and nasal thermistor, oxygen saturation (SaO2) was measured using a pulse oximeter, and chest and abdominal respiratory movements were monitored. A reduction in oxygen saturation to ≤ 4 or the occurrence of symptoms of physiologic awakening, following at least a 30% reduction in air flow for a minimum of 10 sec, was considered as hypopnea. Individuals with an apnea hypopnea index (AHI) >5 were diagnosed as OSAS and included in the study.

An arousal was defined as an increase in EEG and/or EMG activity (frequency and amplitude) that varies significantly from the background activity defining the current sleep stage. An arousal was scored; during NREM sleep consisting of an abrupt EEG frequency shift (eg, alpha, theta, or frequencies >16 Hz, but not spindles) lasting at least 3 s and accompanied by at least 10 s of stable sleep. A REM arousal is characterized by similar EEG changes but should be accompanied by an increase in chin EMG that is at least 1 s in duration. The arousal index is the number of the arousals per hour of sleep [23].

All subjects underwent attended nocturnal polysomnography in the sleep laboratory. Nocturnal polysomnography was performed as previously described. AHI was defined as the number of obstructive apnea plus hypopnea episodes per hour of sleep. Weight, height, waist and hip circumference and blood pressure of patients were measured. Other demographics such as diabetes mellitus, hypertension and smoking status were recorded. Body mass index was calculated with formula. The patients were divided into two groups according to median arousal index as above or below median. The demographic features and parameters of polysomnography test were expressed as to median arousal. Venous blood samples were drawn into serum separator clot activator tubes at 9:00 A.M. from patients after overnight fasting within 48 hours of polysomnography.

Lp-PLA2 concentrations were measured in serum samples with the PLAC Test (diaDexus Inc, USA) reagent kit on UniCel DxC 800 Synchron Clinical System (Beckman Coulter, USA) automated clinical chemistry analyzer. The PLAC test is a turbidimetric immunoassay using two highly specific monoclonal antibodies against Lp-PLA2. Lp-PLA2 concentrations were given as ng/ml. Clinical and analytical sensitivities of the assay are 7 ng/ml and 4 ng/ml respectively. Reference intervals suggested by the reagent manufacturer are 120-342 ng/ml for females and 131-376 ng/ml for males. The assay is linear up to 500ng/ml without prior dilution. Intra-assay and inter-assay precisions are %2 and %1,6 ( Control 1: 143,9 ng/ml) and %1,6 and %0,8 (Control 2: 449,8) respectively. The patients were divided into four groups according to arousal's quartile. Arousal range of patients in the quartiles was defined as the lowest quartile: 1.8-8.4, 2nd quartile: 8.8-14.1, 3rd quartile: 14.4-20.5, the highest arousal quartile: 23.6-71.6. LP-PLA2 level of each arousal quartile was compared. LP-PLA2 level of > 200 ng/ml was accepted as an elevated LP-PLA2 [24].

Total antioxidant capacity in patients was determined with Antioxidant Assay Kit (Cayman Chemical Company, USA). The assay relies on the ability of antioxidants in the sample to inhibit the oxidation of ABTS® (2,2'-azino-di-[3-ethylbenzthiazoline sulphonate]) to ABTS® · + by methmyoglobin. The capacity of the antioxidants in the sample to prevent ABTS oxidation is compared with that of Trolox, a water-soluble tocopherol analogue, and is quantified as mM Trolox equivalents. Samples containing antioxidants between 0,044-0,330 mM can be assayed without further dilution. Inter-assay and intra-assay values are %3 and %3,4 respectively

Data were analyzed by using SPSS software version 13.0 (SPSS, Chicago, IL, USA) and were expressed as mean ± standard deviation. The seasonal distribution of the variables was analyzed with Kolmogorov-Smirnow test. Correlation analysis was carried out with Pearson's correlation test for normally distributed variables. Linear regression analysis was performed to determine the predictors of arousal index. Firstly, linear regression analysis was performed with enter method and later it was performed with stepwise method. Independent Student's t tests were used for comparing differences of parametric variables between two groups. The difference between nonparametric variables was tested by Mann Withney U test. Kruskal-Wallis H tests were used for comparing medians of continuous variables among quartiles of arousal. When statistically significant differences occurred, single posttest comparisons were performed by using the Mann-Whitney U test with Bonferroni correction for multiple comparisons. Differences in prevalence were tested by the nonparametric chi-square test. p value of < 0.05 was considered as statistically significant for all the tests.

Correlation analysis between LP-PLA2 and other variables were demonstrated in Table 4.

It was demonstrated that LP PLA2 level was significantly increased in the highest arousal quartile. * p=0.02 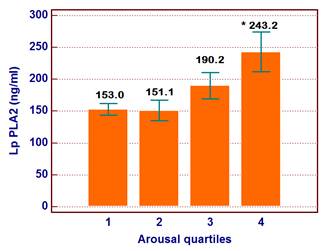 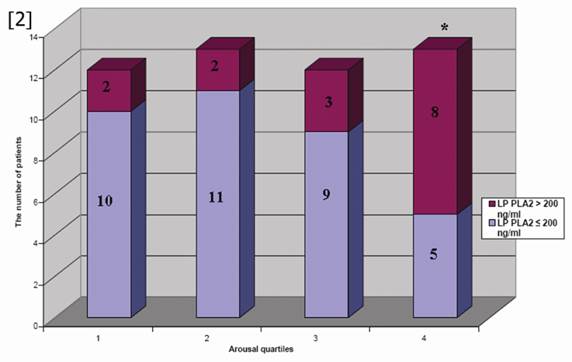 Correlation analysis between LP-PLA2 and polysomnography parameters, other laboratory findings

Large randomized controlled trials identified higher circulating Lp-PLA2 levels as an independent predictor for first-time acute myocardial infarction (AMI), cardiac death and stroke [15-18]. The Rotterdam study demonstrated a higher risk of AMI and stroke especially in patients with Lp-PLA2 activity above the lowest quartile [19]. According to the knowledge, circulating Lp-PLA2 levels were not previously studied in patients with OSA. Due to the circulating Lp-PLA2 levels, patients in the highest arousal quartile may have been increased risk of coronary and/or cerebral event compared to the patients with lowest and second arousal quartiles. Also, the linear association between arousal index and LP-PLA2 was independent from baseline demographic characteristics. But this relation was not valid to the total cholesterol and triglyceride levels. So, Lp-PLA2 levels may be better marker of cardiovascular risk in OSA especially with higher arousal index.

Arousals are associated with acute surges in blood pressure and heart rate [5-7]. Cardiovascular activity is closely modulated during respiratory events; arousals show a particularly powerful effect on sympathetic activity in OSA patients [7, 9]. In patients with OSA, the cardiovascular response to a postapneic arousal is two fold than to a spontaneous arousal [25]. Arousal-induced tachycardia, which generally corresponds to periods of high cardiac pre- and after-load and reduced myocardial oxygen delivery at the termination of respiratory events, may provide a hemodynamic disturbance substrate for initiating cardiac event and potentially sudden cardiac death. The elevated circulating LP-PLA2 levels in patients with higher arousal may contribute to this hypothesis.

Although the reasons for prevalent nocturnal death in OSA remain unclear, three reasonable causes are commonly accused by the investigators. These factors are cardiac arrhythmias, stroke and myocardial infarction. Firstly, the potential mechanisms of sudden cardiovascular death in OSA patients have been based on the cardiac electrical disturbances [10]. The QT interval, reflecting the overall duration of ventricular repolarization, has been shown to be prolonged during apnea and suddenly shortened during the hyperventilation phase post apnea [11]. In healthy volunteers, arousals from non-rapid eye movement (NREM) sleep consistently produced QT interval shortening and PR interval prolongation [12], a response potentially prone to re-entry phenomena and consequently for arrhythmogenesis [27]. Secondly, it has been attributed to cardiovascular mechanical stressors such as frequent apneas causing increases in negative intrathoracic pressure and cardiac pre-and after-load work; and intermittent hypoxemia via causing endothelial dysfunction [28]; and haemostatic disturbances [29-31]. Finally, the present study demonstrated that higher arousal index was associated with increased LP-PLA2 level. The elevated levels of circulating LP-PLA2 may explain prone to sudden death due stroke and AMI in patients with OSA and increased arousal index.

hs-CRP is a well-known conventional cardiovascular risk marker and it was not related with arousal index. This is the major negative result of the study. A possible explanation of this negative result that sensitivity of hs-CRP may be decrease due to the lower conventional risk factors of study subjects such as the lower percentage of patients with hypertension, diabetes mellitus, smoking and hypercholesterolemia. In addition, small number of the patients may be the cause of the limited difference between groups.

The major limitation of the study is small number of the patients and absence of a control group without OSA and this was because of limited financial support. However this study may be accepted as a pilot study. Another issue is the exclusion of the women from the study. Hormone replacement therapy at the postmenopausal period affects the relation between LP-PLA2 and vascular events [32, 33]. In addition, the effect of menopause on LP-PLA2 levels is unclear. Based on the current literature, value of Lp-PLA2 in women is controversial.

Despite these limitations, this study demonstrated that arousal was not only associated with increased sympathetic nervous system activation and electrocardiographic changes but also these patients were prone to cardiovascular and cerebrovascular events via elevated levels of LP-PLA2, which is a marker of increased plaque vulnerability. In addition, total antioxidant capacity, a marker of body defense system against increased oxidative stress was decreased. These results need a confirmation with a large prospective follow up study.

28. Dincer HE, O'Neill W. Deleterious effects of sleep-disordered breathing on the heart and vascular system. Respiration. 2006;73:124-130