Post-traumatic glioma: Report of one case and review of the literature

This is an open access article distributed under the terms of the Creative Commons Attribution (CC BY-NC) License. See http://ivyspring.com/terms for full terms and conditions.
Citation:
Zhou B, Liu W. Post-traumatic glioma: Report of one case and review of the literature. Int J Med Sci 2010; 7(5):248-250. doi:10.7150/ijms.7.248. Available from https://www.medsci.org/v07p0248.htm

We report one case of brain glioma that developed in the scar of an old brain trauma. A 45-year-old man who presented with seizures; MRI showed a large mass in the right temporal region. Surgical biopsy showed a glioblastoma multiforme. The patient had suffered a cranial trauma in a road accident 10 years previously with an intracerebral hematoma in the right temporal region. This case fulfills the established criteria for a traumatic origin of brain tumors and adds further support to the relationship between cranial trauma and the onset of glioma. As stated by other authors, an association between head trauma and brain tumor risk cannot be ruled out and should be studied further.

A previously healthy 45-year-old man presented with seizures and expressive aphasia. He was admitted to our hospital. Magnetic resonance imaging (MRI) documented a large contrast-enhancing lesion in the right temporal region (Fig. 1). The mass histological examination revealed a glioblastoma multiforme. About 10 years earlier the patient had suffered a cranial trauma in a road accident when he traveled in another city. After the trauma he had been unconscious for 3 days and CT scan demonstrated an intracranial hematoma in the right temporal lobe at the site of the subsequent glioblastoma. The intracranial hematoma was treated conservatively at that time. After the diagnosis of the glioblastoma multiforme the patient was treated with radiotherapy and chemotherapy, but he died seven months later.

Although epidemiological studies do not support a definitive connection between head injury and intracranial glioma2, there have been a few case reports of post-traumatic gliomas. As has been reported recently1, it must be emphasized that some of the described cases with post-traumatic glioma did not fulfill the criteria suggested by zulch3 for a relationship between trauma and tumor, only a few authors have provided definite evidence of the causative role of trauma 4.

Zulch 3 in 1965 suggested the following criteria for the acceptance of a causal relationship between trauma and the onset of cerebral tumors:

The stringent criteria for diagnosing a posttraumatic glioma proposed by Zulch et al. 3 and Manuelidis et al. 5 require histopathological confirmation. These criteria were established in the pre-CT (computed tomography) era. The recent cases of posttraumatic glioma that have been reported show CT scans at the time of the trauma demonstrating significant injury and the follow-up scans demonstrating tumor at the same site4. With the routine use of CT and magnetic resonance imaging (MRI), some of the pathologic criteria can be replaced or supplemented by imaging criteria. CT/MRI, which elegantly reveal the severity and location of the traumatic brain injury and the subsequent formation of a neoplasm at the same site, can provide convincing evidence for the traumatic causation of a brain tumor.

Our case fulfill all the criteria defined by Zulch and two of the three criteria of Manuelidis because the intracerebral hematoma secondary to trauma was not histologically verified; it must be emphasized, however, that CT scan documented the absence of tumor at the time of the brain injury.

We suggest that these conditions for the acceptance of a causal relationship between cranial trauma and brain tumor study are the following: (1) the patient had been in good health before suffering the head injury, and early brain CT was negative; (2) the blow was severe and caused brain contusion or intracranial hematoma with a secondary reparative process; (3) the location of the impact and the occurrence of the tumor corresponded exactly one to the other; and (4) there was a more than one year interval between trauma and the appearance of the tumor.

As regards the pathogenesis of post-traumatic glioma, the regenerative and scarring processes secondary to the trauma may in some rare instances stimulate neoplastic proliferation; for these reasons it is important that the tumor arises at the site of the old scar to demonstrate a relationship between trauma and tumor6. If the tumor arises at different site of the old lesion, should be coincidence7. The fact that epidemiological studies have not shown marked increase of the relative risk may reflect the fact that the association, if it exists, is not a direct one. The mechanism of post-traumatic brain cancer is unclear. Experimental data have shown that trauma can act as a cocarcinogen in the presence of an initiating carcinogen 2. It was hypothesized that cells damaged by the initiating carcinogen proliferated as a natural result of the trauma, leading to tumor formation. Trauma probably acts as a cocarcinogen in the presence of an initiating carcinogen, i.e. it may induce the proliferation of “initiated ” cells.

MRI scan of the head show a large temporal mass secondary to the glioblastoma at the site of the previous intracerebral hematoma. 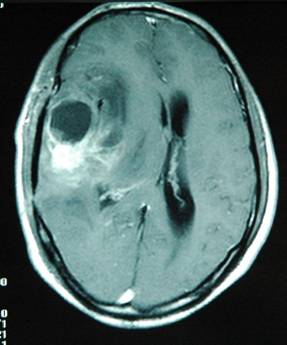 An association between head trauma and brain tumor risk cannot be ruled out and should therefore be studied further. Post-CT/MRI era should have more convenient conditions to study. Large study populations are imperative because of the relatively low prevalence of head injuries and the low incidence of brain tumors.