Background: The aim of our study was to determine the impact of CYP3A5*1 and CYP3A5*3 on the kinetics of tacrolimus in renal transplant recipients.

Material and methods: Forty kidney recipients were selected to participate. Maintenance scheme consisted of tacrolimus, a purine inhibitor and a steroid. CYP3A5 genotyping was performed with PCR and RFLP. Pharmacokinetic model was developed with Linear Regression and General Linear Model repeated measures approach. The impact of sex, CYP3A5*1 allele, age at transplantation, hepatic and renal function on tacrolimus kinetics was examined.

Tacrolimus, a calcineurin inhibitor, remains the centerpiece of the maintenance treatment scheme in renal transplant recipients. Both its narrow therapeutic index and its highly pharmacokinetic variance may lead to overtreatment and toxicity or insufficient treatment and transplant rejection, conditions that are usually seen in clinical practice. Thus, it is obvious that the optimal tacrolimus dose has to be achieved soon after transplantation and must be preserved thereafter.

In the recent years, effort has been made to determine the potential causes of inter- and intra-individual variability. Except for the characteristics of each individual and several environmental factors, the role of biological factors affecting the drug absorption, distribution, metabolism or deletion has been investigated [1-9]. Till now, the most significant biological factors known to affect pharmacokinetics are the drug transporters and the metabolizing enzymes [7,9].

CYP3A, the primary subfamily of the cytochrome P450 (CYP) enzymatic system, is responsible for the metabolism of tacrolimus [10]. Specifically; tacrolimus is mainly metabolized by CYP3A4 and CYP3A5 enzyme isotype. CYP3A5 polymorphisms seem to affect tacrolimus kinetics at a greater degree compared to CYP3A4 ones and thereby, these polymorphisms are thought to be the best candidates for pharmacogenetics' application in immunosuppresion [1,7,11-13]. CYP3A5 gene is expressed in a limited number of individuals. When it is expressed, it may count for the 50% of the total hepatic CYP3A protein [5,14].

Macphee et al were the first to detect the effect of a CYP3A5 polymorphism in the distribution of tacrolimus [11]. CYP3A5*3 (G6986A) polymorphism, located in intron 3, has been recognized as the most important CYP3A5 polymorphism. The alleles A and G are CYP3A5*1 and CYP3A5*3, respectively. Individuals carrying at least one CYP3A5*1 allele express CYP3A5 protein whereas individuals homozygotes for CYP3A5*3 are non-expressors [15-18].

There are grave indications that pharmacogenetic testing for CYP3A5 prior to transplantation improves the individualization of immunosuppressive therapy although epigenetic factors must be taken into account [7]. The aim of the present study was to determine the impact of CYP3A5*1 and CYP3A5*3 genotype on the kinetics of tacrolimus in renal transplant recipients. The drug dose and level, the drug dose-adjusted level and the drug volume of distribution values are analyzed based on the presence of CYP3A5*1 allele, sex, age, renal and hepatic function.

Forty renal transplant recipients (median age: 41 years, range: 13-69), who attended the Outpatient Clinic of Nephrology and treated with TAC as the primary immunosuppressant, were selected to participate in the study. The protocol was approved by the Institution Ethics Committee of our hospital and informed consent was obtained from all subjects.

Maintenance treatment scheme consisted of a combination of a calcineurin inhibitor (tacrolimus) with a purine inhibitor (mycophenolate mofetil or azathioprine) and a steroid (prednizolone). Tacrolimus was given twice a day in individually adjusted doses and its trough levels were measured 12 hours post dose.

The difference between LR and GLM repeated measures analysis is that LR does not take into account the sequel of the data and it encounters them as derived from different patients. Thus, GLM repeated measures approach seems to be a more accurate methodology for the analysis of such data but it is more demanding in the quantity of available data.

In the LR analysis, the kinetic parameters were modeled based on sex, presence of CYP3A5*1 allele, age at transplantation (<40 versus ≥40 years old), hepatic (AST≤40U/ml and ALT≤35U/ml versus AST>40U/ml and/or ALT>35U/ml) and renal (serum creatinine ≤1.4mgr/dl versus >1.5mgr/dl) function. In the GLM repeated measures approach, a multivariate model was developed. Sex and genotype were used to define the subgroups of our patient population whilst the age at transplantation served as a covariate. The threshold of statistical significance was set at 5% (a=0.05).

According to LR statistical approach, the presence of CYP3A5*1 variant was associated with lower tacrolimus dose adjusted concentration at 3, 6, 12 and 36 months after transplantation (Figure 2). Hepatic and renal function showed a statistically significant effect on tacrolimus dose adjusted concentration at 3 months after transplantation (p<0.001 and 0.028, respectively). There was no evidence that gender had a significant impact on tacrolimus kinetic parameters. 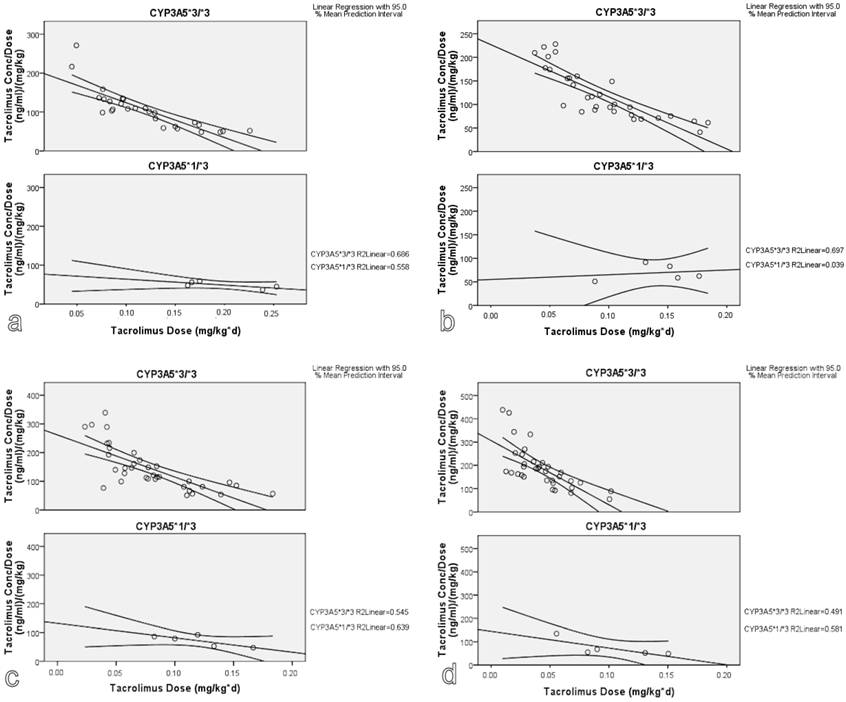 Genotype effect on tacrolimus dose adjusted concentration (a) and volume of distribution (b): A GLM repeated measures approach.

Pharmacogenetics emerged during 1950s seeking to detect the potential relation between altered genetic basis and behavior after drug administration. However, several epigenetic factors such as age, co-morbidity, disease seriousness, co-administrated drug therapies and their interactions, renal and hepatic function, nutritional and other habbits, are often responsible for the intra- and inter-individual variability seen after drug administration [6,9]. For these reasons, therapeutic drug monitoring constitutes a crucial step in the administration of several drug agents. However, this empirical treatment algorithm carries increased risk of side effects or insufficient treatment.

Taking into account the critical clinical condition of renal transplant recipients and the limited number of renal transplants, the immunosuppressant treatment scheme prescribed to renal transplant patients must be adjusted in a way that precludes the possibility of under or over-treatment. The main drug in the immunosuppressant scheme that kidney recipients receive is tacrolimus. Most studies seek for the detection of polymorphisms that are associated with the individual's response to tacrolimus. However, in order to secure the appropriate administration of tacrolimus, both genetic and epigenetic factors must be taken into account [7,15]. For this reason, we attempted to model tacrolimus kinetics based on both genotype and epigenetic factors.

Disparity exists in the literature as to which genes and which genetic polymorphisms must be studied. We studied the presence of CYP3A5*1 in 40 kidney recipients. The genotype frequencies observed in our study are in agreement with the study of Arvanitidis et al, making us assume that our study sample is a representative one of the population [12]. Besides, the frequency of CYP3A5*3 allele in Caucasian Canadians is about 93%, and 83% of Dutch Caucasians are CYP3A5*3 homozygotes [19,20]. We chose to study this specific genetic polymorphism of CYP3A5 metabolizing enzyme as this isotype seems to critically affect the metabolism of TAC and this polymorphism is a frequent one in Greek population [3,5,19-21]. Besides, CYP3A5*1 has been proposed to regulate both the expression of CYP3A5 and CYP3A4. Other CYP3A5 alleles (*5, *6, *7) show low frequency in Caucasian population and thus, they are regarded as less suitable for screening purposes [19,20].

We failed to highlight the effect of the variants studied in all timepoints, probably due to the presence of several parameters affecting tacrolimus kinetics. The presence of CYP3A5*1 allele does not predict the amount of CYP3A5 protein accurately as it can be affected by other factors, genetic (expression of m-RNA, stability of CYP3A5 protein, dual metabolic pathway via CYP3A4 and CYP3A5, linkage disequilibrium with CYP3AP1 pseudogene etc) or not (drug interactions, environmental influences etc) [2,4,6,7,9,11,22,23]. Although trough concentrations of tacrolimus were corrected for dose, differences in diet, habits, comorbidity or concomitant treatment schemes were not inspected. Due to the limited patient population, we were not able to estimate the impact of concomitant drug agents and comorbidities on the kinetics of tacrolimus.

Till now, several studies with limited or extended patient populations have been carried out attempting to clarify the influence of various factors on tacrolimus kinetics. However, the results remain controversial with regard to pharmacokinetic and clinical effect of the studied parameters. Our main results are in alignment with the results of Zhao et al and Tsuchiya et al [14,17]. We found that individuals carrying one CYP3A5*1 allele need higher tacrolimus dose to achieve the target blood concentration, compared to CYP3A5*3 homozygotes.

We proved that CYP3A5 genotype affects individuals' response to tacrolimus both in the early and late phase after renal transplantation. However, given that most drug effects are polygenic in nature and that several epigenetic factors alter tacrolimus kinetics, the combination of population pharmacokinetic/pharmacodynamic and pharmacogenomic studies is deemed necessary.

The authors would like to thank the personnel of Department of Internal Medicine-Nephrology, University Hospital of Patras, Rion for their help throughout this study.

11. MacPhee IA, Holt DW. A pharmacogenetic strategy for immunosuppression based on the CYP3A5 genotype. Transplantation. 2008;85:163-5

16. Walker DK. The use of pharmacokinetic and pharmacodynamic data in the assessment of drug safety in early drug development. Br J Clin Pharmacol. 2004;58:601-8