Rickettsiae are short, pleomorphic but usually rod-shaped or coccobacillary Gram-negative bacteria that grow strictly in eukaryotic cells (obligate intracellular parasites). They have the ability to multiply in one or more arthropods and to exist in natural reservoirs of one or several warm-blooded animal hosts, including humans. Rickettsiae are divided into 5 groups: 1) Spotted fever group, including R. rickettsii, R. conorii, and R. akari; 2) Typhus group, including R. prowazekii and R. typhi; 3) Scrub typhus (R. tsutsugamushi); 4) Q fever (Coxiella burnetii); 5) Neorickettsiosis.

In the Spotted fever group, R. rickettsii is the etiological agent of Rocky Mountain spotted fever, transmitted by the bite of a tick, whereas R. akari is the etiological agent of rickettsialpox, transmitted by the bite of a mite. Rickettsia conorii, the most widespread rickettsia of the spotted fever group, is the etiological agent of Mediterranean spotted fever (MSF) in humans. The brown dog tick, Rhipicephalus sanguineous, is the prevalent vector. The disease is normally transmitted by tick bite, but it may also be acquired through the skin or eye when the ticks are crushed. The disease is endemic during the spring and summer in most of the regions bordering on the Mediterranean and Black seas, in Kenya and other parts of central Africa, South Africa, and certain parts of India. MSF varies in severity but is seldom fatal. The incubation period is 5-7 days and the onset is sudden in about 50% of cases. The duration of disease is 7-14 days. The clinical signs and symptoms include fever (up to 40°C), headache, chills, myalgias, arthralgias, malaise, and anorexia. Maculopapular rash, involving also the palms of the hands and the soles of the feet, is a hallmark of rickettsial infection, but usually follows systemic symptoms. Its absence should not rule out a possible rickettsial etiology, especially during the first week of illness. [1]

Conjunctivitis with petechial lesions on the bulbar conjunctiva and pharyngitis are common. Most patients with MSF present with a “tache noîr”, a small crust surrounded by a violet erythemic halo, that represents the typical appearance of the MSF entrance site caused by the tick bite; however, its absence should not exclude a possible infection. Less common clinical signs include hepatomegaly and hepatitis, splenomegaly, mild pulmonary involvement, and CNS impairment. The ocular manifestations of MSF are usually limited to petechial lesions on the bulbar conjunctiva due to local vasculitis with conjunctivitis. Parinaud's oculoglandular syndrome, corneal ulcers, uveitis, retinal vasculitis, endophthalmitis, and anterior ischemic optic neuropathy have also been described.

Various laboratory procedures can be used for diagnosing MSF, including isolation of R. conorii by culture, serologic testing (indirect immunofluorescence assay, IFA), immunohistochemical detection of R. conorii in skin biopsy, and PCR amplification of rickettsial DNA from tissue specimen. Detection of specific IgM and IgG anti-R. conorii by IFA is used regularly by most laboratories. Demonstration of IgM titers of ≥1:64 and IgG titers of ≥1:128 and/or a fourfold rise in IgG titer is considered evidence of R. conorii infection. The standard treatment for MSF is oral doxycyclyne (100 mg daily) for 10-14 days.

Both cases described herein were observed on the island of Sardinia, Italy, an endemic area for MSF.

A 65-year-old farmer presented with a 5-day-long history of progressive visual loss in his left eye. A tick had been removed from his left leg 20 days earlier. Twelve days before admission he had had fever (38.5°C), headache, arthromyalgia, and malaise, but no rash was observed. These symptoms resolved spontaneously in 6 days. Physical examination showed a small crust surrounded by a “tache noîr” (Figure 1). On initial examination, left corrected visual acuity was 6/60. Slit-lamp examination of the affected eye revealed mild aqueous flare. Fundus examination showed vitreous opacities, juxtapapillary retinochoroiditis, and retinal vasculitis and haemorrhages along the inferior temporal vessels. A blood sample taken on the day of admission revealed the presence of IgM (titre=1:64) and IgG (titre=1:64) to R. conorii. Serum antibodies to R. conorii were detected by IFA technique. TPHA test and tests for the detection of serum IgM and IgG to Toxoplasma gondii and Borrelia burgdorferi were negative. As a result, the diagnosis of MSF was made and the patient was treated with oral doxycycline (200 mg daily) and topical chloramphenicol (0.5%), dexamethasone (0.2%), and atropine (1%). After 3 weeks of treatment, there was complete resolution of the disease. A second blood sample taken 21 days later showed a threefold rise (titre=1:256) in IgG to R. conorii, thus confirming the diagnosis. [2] 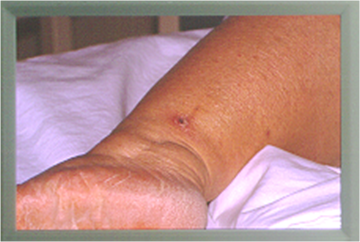 A 33-year-old woman was admitted with a week-long history of a progressively inflamed left eye. She had eyelid edema, discharge, conjunctival hyperemia, chemosis, a granulomatous nodule on the lower half of the bulbar conjunctiva, and a marginal corneal ulcer at the 4 o'clock position. Swollen preauricular and submandibular lymph nodes were present on the same side of the affected eye (Parinaud's oculoglandular syndrome). Three days later she presented with fever and maculopapular rash. After careful questioning, the patient revealed that 2 weeks earlier a jet of blood had splashed into her left eye as she accidentally crushed a tick on her dog. Blood samples from the patient revealed the presence of antibodies to R. conorii; therefore MSF was diagnosed. Systemic and topical treatment with tetracyclines was successful. [3]