Introduction into Pathology of Ocular Zoonoses

This is an open access article distributed under the terms of the Creative Commons Attribution (CC BY-NC) License. See http://ivyspring.com/terms for full terms and conditions.
Citation:
Schaefer HE. Introduction into Pathology of Ocular Zoonoses. Int J Med Sci 2009; 6(3):120-122. doi:10.7150/ijms.6.120. Available from https://www.medsci.org/v06p0120.htm

Zoonosis: what does it mean?

The meaning of the term “Zoonosis” has changed greatly over the time. At least in the first half of the 19th century, early microscopes easily identified fungi, small animals, protozoans and metazoans: bacteria and viruses were much too small to be visualized. Hence, for more than a century, the term zoonosis indicated any disorder due to infectious agents visible by microscope. Ironically, the first reports of cytomegaly were attributed to an infection by a novel fungal or amebic organism. However, with the advent of modern microbiolgy the understanding of zoonosis has changed completely. No later than 1958, the World Health Organization produced an official definition of Zoonosis as: “diseases transmitted in a natural way from vertebrate animals to humans”. Currently, three subtypes of Zoonoses may be distinguished: [1]

A. Zoonoses transmitted through the conjunctiva = the eye is the entrance for the infectious agent

PS is probably the first description of an infection by Listeria monocytogenes. It takes its name from the French ophthalmologist, Henri Parinaud, who, in 1889, described a granulomatous conjunctivitis with regional suppurative lymphadenitis and parotid oedema, mainly affecting butchers, stable-hands, and coachmen. Tthe infection is transmitted after contamination of hands with animal faeces.

CSD was also described by a French ophthalmologist, Debré, in 1950. Its etiological agent is the gram-negative bacterium, Bartonella henselae, responsible for a specific type of lymphadenitis with microabscesses bordered by reticulo-histiocytic cells (Figure 1) and hyperplastic conjunctivitis, with regional lymph node swelling, fever and anorexia. Prognosis is usually favourable, but in 2% of cases, arthritis, encephalitis, optic neuritis and amaurosis may ensue.

Conjunctivitis due to Chlamydia psittaci (CP)

CP mainly affects guinea pigs, or cats or birds, and may be transmitted to humans directly through the conjunctiva from pet animals. CP causes a keratitis punctata superficialis with intracellular reticular bodies and follicular conjunctivitis. The infection is typically chronic and may induce a chronic antigenic stimulation of the lymphoid ocular adnexal tissue - the so called OA MALT (Ocular Adnexal Mucosa -Associated Lymphoid Tissue). As has been shown recently by the Milanese group of Ferreri and co-workers, chronic chlamydial conjunctivitis may induce a low malignant MALT-lymphoma. [2]

B. Zoonoses transmitted to the eye via blood 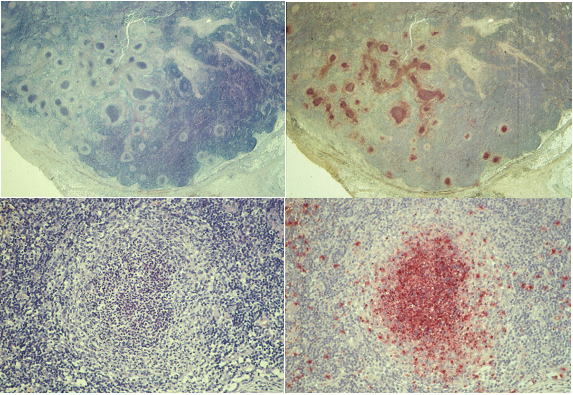 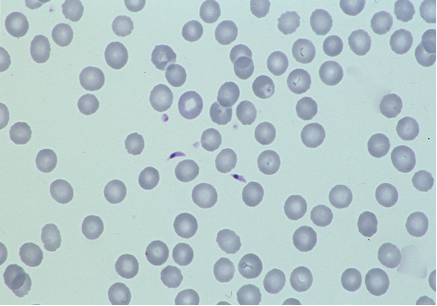 Helminthic organisms of vertebrate animals may infect humans, who represent a sort of “accidental host”. These helminths may cause cysticercosis and larva migrans syndrome and dirofilariasis.

Cysticercosis is an infection by the larval stage of the type worm Taenia solium. Ocular symptoms are the consequence of cystic larval growth and inflammatory reaction due to eventual necrosis of parasites. - Analogous intraocular lesions may be caused by coenuriasis, the larval stage of tape worms of the genus Multiceps. Definitive hosts are dogs and wolves.

Totally independent from the presence and intensity of larva migrans visceralis, a single larva coming to the eye may reach the ocular fundus causing severe chronic endophthalmitis with retinal detachment.

Adult filarial nematodes infest different regions of the human body, in a way which is specific for each species. The genus Dirofilaria is of only marginal interest for the eye. Dogs (D. immitis) and other mammals, including cat, fox, wolf, otter, raccon (D. tenuis), and sea lion serve as common hosts. From those natural hosts microfilariae circulating in blood may accidentally be transmitted by mosquitoes to man. Larvae migrate, produce local inflammation and die in various stages of development. This may cause thrombotic lesions in the heart (D. immitis), fibronecrotic spherical coin lesions in the lungs, in lymph nodes, in the subcutis and in the conjunctiva (D. repens, D. tenuis,“D. conjunctivae”) and later a granulomatous reaction. Lesions may go unnoticed and in endemic areas up to 20% of the population is seropositive. However in delicate organs like the eye, infection is more easily noticed, hence ocular infestation is the most evident.