Parma is a city located in the western part of the region Emilia Romagna (Figure 1), about 100 km far from Milan. The province of Parma is approximately 3.445 km2 wide. The mountains of the Appennine range divide Parma Province from Tuscany and from Ligury, and Po river flows through its territory. The territory of Parma Province presents two types of environment: mountains with woods in the South and floody plains in the North. The Po river runs through a fertile plain where world famous food and wines are produced. Green is undoubtedly one of the dominant colours in the territory of Parma and a series of Nature Reserves in the province of Parma as well as parks, wildlife sanctuaries, state forests are all protected areas.

The total population is about 420.000 residents. The principal activities include the raising of farm animals and the transformation of raw products into food (cheese, meat, cured meats, etc). Indeed, the province of Parma is known also as “the food valley”. The characteristics of the environment, the presence of woods and the habit of consuming sausages and raw meat make Parma Province an endemic area for both arthropod- and food-borne zoonoses.

Approximately 20% of cases of zoonotic disease in Italy are reported from the Emilia Romagna Region. In Europe there is no obligation to register Lyme cases and therefore the real incidence of Lyme disease is unknown. In Italy, Lyme disease has been subject to mandatory notification since 1990, but there is likely an underestimation of the real prevalence. There are 400-900 new cases/year in Italy and Emilia Romagna is an endemic area with 831 new cases from 1996 to 2007.

The Inflammatory and Autoimmune Ocular Diseases Service of Parma University Hospital is a reference Centre for the Parma area. Therefore, almost all cases of infectious diseases with ocular complications are referred to this Centre for diagnosis and therapy. Thus, the Centre's database represents a reliable source of epidemiological information on the incidence of zoonoses in this territory.

Two hundred and seventy six new cases of ocular inflammatory disease were examined in this Service in 2007. Forty one (15%) patients had ocular inflammation with infective etiology (including herpetic keratouveitis, tuberculosis, syphilis, etc). There were 26 (63%) new cases of zoonoses, including 24 cases of toxoplasmosis, 1 case of ocular toxocariasis and 1 case of Lyme borreliosis.

The case of toxocariasis regarded a 32 year-old Dominican woman, who had been living in Italy for the last 12 years. Ocular disease arose after about 6 months since her last visit to her native country. In this case the patient had a panuveitis, which recovered only after a combination of medical treatment and surgery, with a final visual acuity of 40% in the affected eye [1].

The only case of Lyme disease affected a 31 year-old farmer and his ocular manifestations are described in the specific section.

Geographical location of the province of Parma (Italy). 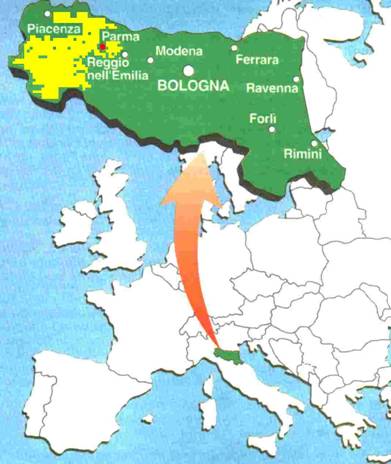