Department of Internal Medicine I, University of Regensburg, Germany

Introduction: Close monitoring of arterial blood pressure (BP) is a central part of cardiovascular surveillance of patients at risk for hypotension. Therefore, patients undergoing diagnostic and therapeutic procedures with the use of sedating agents are monitored by discontinuous non-invasive BP measurement (NIBP). Continuous non-invasive BP monitoring based on vascular unloading technique (CNAP®, CN Systems, Graz) may improve patient safety in those settings. We investigated if this new technique improved monitoring of patients undergoing interventional endoscopy.

Methods: 40 patients undergoing interventional endoscopy between April and December 2007 were prospectively studied with CNAP® in addition to standard monitoring (NIBP, ECG and oxygen saturation). All monitoring values were extracted from the surveillance network at one-second intervals, and clinical parameters were documented. The variance of CNAP® values were calculated for every interval between two NIBP measurements.

Cardiovascular complications including arrhythmia, ischemia and hypotension during interventional endoscopy, are not common, but nevertheless higher than previously reported, and may cause harm to patients [1, 2]. In elderly patients and in those with compromised cardiovascular function even short episodes of hypotension may cause extensive problems. Hence close monitoring of the arterial blood pressure (BP) is a central part of cardiovascular surveillance in these patients. Theoretically, this is guaranteed at best by invasive monitoring with an intra-arterial catheter, but this would put patients at risk for adverse events like infections or necrosis. Therefore, patients undergoing diagnostic and therapeutic procedures with the use of sedating agents are monitored by discontinuous non-invasive BP measurement (NIBP) with measure intervals between 3 to 15 minutes as standard. However, hypotensive episodes may be missed between these intervals. One possible solution may be the application of a new technique of continuous non-invasive BP monitoring by CNAP® (CN Systems, Graz, Austria) in those settings. CNAP® is based on the vascular unloading technique and enables a beat-to-beat BP measurement without having substantial negative side effects [3, 4]. We compared test readings from NIBP and CNAP® values in patients undergoing interventional endoscopy such as endoscopic retrograde cholangiopancreatography (ERCP). The aim of this study was to investigate the accuracy of NIBP measurements in these patients, and if cardiovascular patient monitoring in interventional endoscopy could be improved by CNAP®.

The prospective study took place between April and December 2007 on patients undergoing interventional endoscopy. The study was approved by the ethics committee of the University of Regensburg and performed in accordance with the declaration of Helsinki.

40 patients undergoing interventional endoscopy were monitored by CNAP® in addition to standard monitoring (NIBP, ECG and oxygen saturation). Patients with peripheral vascular pathology like vascular implants and raynaud syndrome were excluded. All patients were treated with analgosedative medication and were asked to limit their arm movements.

Continuous non-invasive BP monitoring based on vascular unloading technique (CNAP®, CN Systems, Graz, Austria) is commercially available since 2007. It can be used in combination with Task Force Monitor® (CN Systems, Graz, Austria) or with Draeger (Draeger Medical, Lübeck, Germany) and Siemens Monitors (Siemens Erlangen, Germany). The method is based on concentrical interlocking control loops for correct long-term tracing of finger BP, including automatic set point adaption, light control and separate inlet and outlet valves for electric-pneumatic control [3, 4]. The cuff pressure is continuously changed through the systolic and diastolic blood pressure cycle to keep the finger's luminescence constant. Therefore, the cuff pressure corresponds to the pressure in the finger at any time. CNAP® is calibrated by standard NIBP via upper arm's cuff.

Figure 1 shows the double-finger cuff, placed at patient's middle and index finger or middle and ring finger; respectively. The cuff is connected with the cuff controller and the monitoring device.

Interventional endoscopy in our gastroenterological department; in the left corner the CNAP® double-finger module is highlighted. 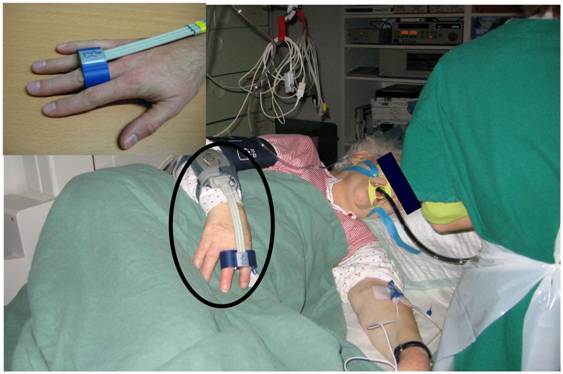 24 female and 16 male patients, with an average age of 59±15 years underwent 32 ERCPs and 8 other interventional endoscopies with a mean duration of 66 minutes ± 34 minutes. Indications leading to endoscopy were: malignant stenosis of the hepatic duct (n=13), cholelithiasis (n=8), benign stenosis of the hepatic duct (n=6), pancreatitis/pancreas-pseudocysts (n=4), others (n=8). All patients (mean BMI 25 kg/m²) received midazolam (7.4±3.3 mg) and pethidin (52.5±19.2 mg), 24 patients were additionally treated with propofol (90.9±70.3 mg) and 2 patients with ketamine (100.0±50.0 mg). No cardiovascular complications following endoscopy were detected.

2660 minutes of monitoring were recorded. Within this time 103 117 CNAP® and 333 NIBP measurements were recorded. Furthermore, we recognized 143 088 heart rate values and 145 665 oxygen saturation values.

In order to determine blood pressure changes undetected by conventional NIBP surveillance, NIBP intervals were defined as the time space between two adjacent NIBP measurements, and the CNAP readings within these intervals were analyzed (figure 2). In total, 254 NIBP intervals were calculated with a mean length of 7.5±4.6 minutes. 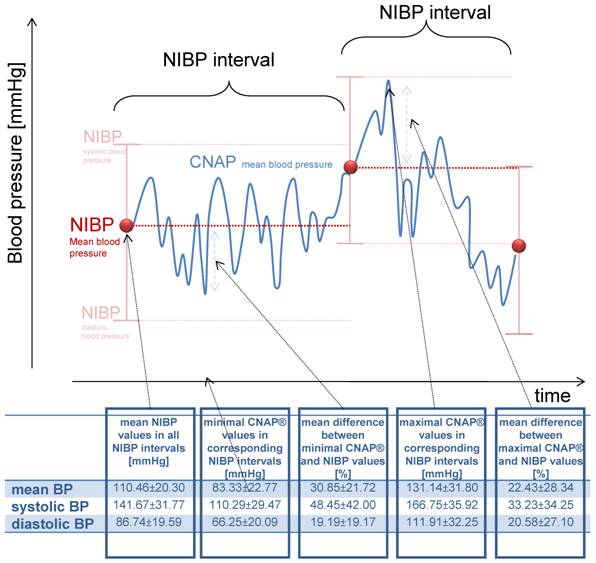 Using standard cardiovascular monitoring, a NIBP value is presumed to reflect the patient's blood pressure until a second value is available. Therefore, we calculated the variance of CNAP® values for every NIBP interval based on the first NIBP value (figure 2). With this approach, the maximal increase and decrease in blood pressure was calculated for each interval, and the mean of these deviations for all NIBP intervals was determined. The mean maximum decrease was 27.13±16.81 mmHg (30.85%) and the mean maximal increase was 20.69±28.34 mmHg (22.43%) per NIPB interval (figure 2).

Most physicians using NIBP monitoring during procedural sedation are conscious of the fact that arterial pressure values may differ between two NIBP measurements. We assumed that a fluctuation of 10% or 20% of the initial NIBP value can be safely tolerated, depending on the initial value (figure 3). In our investigation, 45.12% of all mean CNAP® values were beyond this “tolerable” interval of 10%, and 15.80% of the values were even beyond the 20% range.

Illustration of the "tolerated" fluctuation of 10% or 20% respectively, based on the initial NIBP value. The percentage of measurements within this corridor is shown bellow. 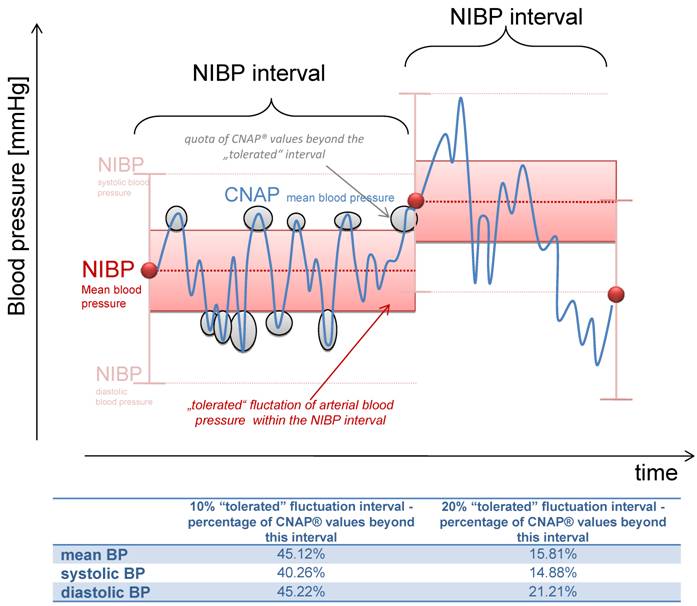 Illustration of the "tolerated" fluctuation of 10% or 20% respectively, based on the calculated straight lines between two NIBP values. The percentage of measurements within this corridor is shown bellow. 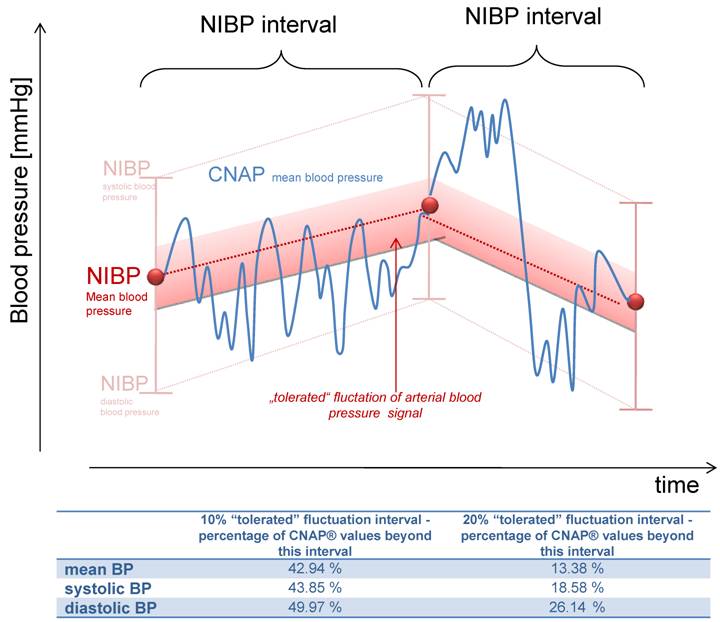 Patients undergoing interventional endoscopy, as a common example of procedural analgo-sedation, require close cardiovascular monitoring due to well known complications of sedative agents like hypotension and respiratory depression [5]. The use of propofol for procedural sedation is increasing because of its rapid onset and offset properties [5], although an increased rate of fatal complications was published [6] and its use in endoscopy is controversially discussed by gastroenterologists and anesthesiologists [7, 8]. Especially the rate of hypotension measured by the method of Riva-Rocci has been reported as high as 8-12%, although many publications showed the safety of propofol for procedural sedation in endoscopy [9, 10] and in emergency departments [11, 12].

Our results using a continuous non-invasive BP monitoring by vascular unloading technique (CNAP®) during interventional endoscopy show that there are large BP changes in between the currently common discontinuous NIBP measurements, and 16% of mean CNAP® values differed more than 20% from the previous NIBP value. In our study only a few episodes of hypotension were detectable, but none of these were registered by NIBP measurements. In other collectives, the rate of hypotensive episodes may be higher. Our data show that the rate of hypotension previously determined by NIBP measurements underestimates the true hypotension incidence during endoscopy, and especially rapid BP chances are often undetected. Unfortunately, the local ethics committee did not permit blinding of the CNAP values to the endoscopists, which may explain the quite large NIBP intervals, thereby underestimating the accuracy of the NIPB measurements.

The clinical impact of hypotensive episodes during procedural sedation is not entirely clear, since short hypotensive episodes in general anesthesia are rarely been associated with permanent problems [13]. However, rapid BP changes may be responsible for considerable side effects. Cardio-pulmonary complications account for the majority of all reported complications during endoscopy [14], [1]. Besides well-known serious conditions like respiratory failure and cardiac arrest, hypotensive episodes in the cardiovascular compromised patient may result in ischemic complications such as kidney failure or heart ischemia [1, 2, 15]. In our study, no serious complications occurred, but due to the study design the medical staff was aware of the measured CNAP® blood pressure values throughout the study.

Our study provides evidence that hypo- and hypertensive episodes are earlier recognized with a continuous noninvasive blood pressure monitoring device, and usage of CNAP® may therefore enable medical staff to act more rapidly and effectively to BP changes before serious adverse events occur. In our opinion, this will help to perform procedural sedation more safely.

The CNAP® equipment was provided by CN Systems (Graz, Austria). No other conflict of interest exists.

8. Vargo JJ. Propofol may be safely administered by trained nonanesthesiologists. Pro: Propofol demystified: it is time to change the sedation paradigm. Am J Gastroenterol. 2004;99(7):1207-1208