Background: Colonisation of cystic fibrosis (CF) lungs with Pseudomonas aeruginosa is facilitated by two lectins, which bind to the sugar coat of the surface lining epithelia and stop the cilia beating.

Objectives: We hypothesized that P. aeruginosa lung infection should be cleared by inhalation of fucose and galactose, which compete for the sugar binding site of the two lectins and thus inhibit the binding of P. aeruginosa.

Results: The sugar inhalation was well tolerated and no adverse side effects were observed. Inhalation alone as well as combined therapy (inhalation and antibiotics) significantly decreased P. aeruginosa in sputum (P < 0.05). Both therapies also significantly reduced TNFα expression in sputum and peripheral blood cells (P < 0.05). No change in lung function measurements was observed.

Conclusions: Inhalation of simple sugars is a safe and effective measure to reduce the P. aeruginosa counts in CF patients. This may provide an alternative therapeutical approach to treat infection with P. aeruginosa.

Chronic infection of the airways with P. aeruginosa is the leading cause of morbidity and mortality in the majority of CF patients (1). This pathogen colonises the airways and lungs often in the late teens or early twenties and can be controlled for a prolonged time by antibiotic treatment (2). However, during the long period of infection, it gets resistant towards chemotherapy and thus the infection cannot be controlled any longer. This situation will become more evident in the future as the pipeline for the development of antibacterial agents runs dry with only five new drugs likely to being approved within the next few years (3).

However, novel strategies to fight the infection may be developed by interfering with the bacterial attachment to the airway epithelium. P. aeruginosa produces two lectins, carbohydrate binding proteins, designated P. aeruginosa lectin I (PA-I or Lec A) and II (PA-II or Lec B). The first one is specific for galactose, the second for fucose (4). Both lectins are used in two clever ways to facilitate its pathogenicity. First of all, the lectins attach to the covering epithelia by binding to the glycocalix of the mammalian cells. By adding simple sugars, this attachment can be blocked as shown in external otitis caused by P. aeruginosa (5). However, simple adhesion via lectin sugar interactions would not be enough to persist in the airways as the mucociliary elevator would remove all pathogens residing within mucus layer of the airways´ lining fluid. As this elevator is driven by the beating of the cilia, their inactivation would also facilitate the infection, which is indeed the case as these two lectins also immobilise the cilia, thus making the mucociliary elevator ineffective (6). A case report demonstrated, that inhalation of galactose and fucose could indeed remove P. aeruginosa from the airways of a non CF patient even if conventional antibiotic treatment failed (7).

The aim of the present study was to investigate the effect of this galactose/fucose solution in CF patients with chronic infection with P. aeruginosa as at least the PA-II acts on cilia of CF patients in vitro in the same way as in normal controls (8).

This study was an open clinical trial. Adult CF patients were recruited from the CF outpatient clinic and the pulmonary ward of the Department of Medicine I, University Hospital Hamburg-Eppendorf. Patients had chronic infection with P. aeruginosa (proven by positive sputum cultures for at least three years) and acute exacerbation at time of recruitment. They were randomized to be treated with inhalation of a 10 ml of 0.1 M fucose / 0.1 M galactose solution in 0.9 % NaCl twice daily for 21 days either in the presence or absence of therapy with intravenous antibiotics (cephalosporine + aminogylcoside). The concentration of fucose and galacose was based on data from a previous study (6). Previous medication including inhaled antibiotics, vitamines, pancreatic enzymes, dornase alpha, bronchodilatators was continued. Sputum cultures, sputum cell counts, peripheral blood cell counts, lung function measurements (vital capacity, VC, forced expiratory volume in one second, FEV1), arterial oxygen pressure, inflammatory markers (C reactive protein, IgG, IgE), liver function tests (GOT, GPT) and cytokine measurements (tumor necrosis factor-α, interleukin-10) were performed before and after treatment. The study protocol was approved by the local Ethics Committee of the City of Hamburg, Germany.

After rinsing their mouth with sterile water patients coughed sputum into a sterile container. One part was immediately transported to the Department of Microbiology for bacterial culture. The other part was weighed, lyophylized with DTT and filtered through a nylon mesh. After centrifugation the cell pellet was redissolved into phosphate buffered saline (PBS) containing 2% fetal calf serum (FCS; Seromed, Berlin, Germany). Cell numbers were counted and cytospins were prepared for differential cell counts.

Sputum cell and PBMC samples, each containing RNAzol (Wak, Bad Soden, Germany) and 80,000 cells, were stored at -20ºC until further preparation. RNA was extracted by treatment with chlorofrome and precipitated with isopropanol. RNA was reverse-transcribed using 2 μl 25 mM MgCl2, 1 μl 10xPCR buffer, 1 μl 10 mM of each desoxynucleotide triphosphate (dNTP), 0.5 μl 50 μM OligodT, 0.5 μl 20 U/ μl RNAse inhibitor and 0.5 μl 50 U/ μl reverse transcriptase (Perkin Elmer Biosystemsm Roche, Branchburg, USA). The mixture was incubated at 42ºC for 30 min and at 99ºC for 5 min. Samples were stored at -20ºC until amplification.

PCR products were analyzed by electrophoresis on a 2% agarose gel containing ethidium bromide and visualized with UV light. The sizes of the PCR products were compared with the expected PCR product length using a molecular weight marker (Boehringer, Mannheim, Germany) ran in parallel.

Densitometric analysis was performed with the Eagle Eye II Still Video Systeme (Stratagene, La Jolla, USA). The expression was standardized to that of β-actin expression from the same reverse-transcribed TNFα or IL-10 mRNA sample. Ratios of cytokine:β-actin were calculated for semiquantitative RNA expression measurement as previously described (9).

An overall ANOVA, followed by multiple testing with the Bonferroni correction, was performed. Differences between conditions were assessed by means of post hoc pairwise comparison with the Dunnet test. A P value of less than 0.05 was considered statistically significant. All values are given as means ± SEM if not otherwise stated.

A total number of 11 patients (8 male, 3 female, median age 27 years) were included. 4 patients were treated with inhalation only, 7 patients received inhalation and antibiotics. Table 1 summarizes the demographics of both groups. 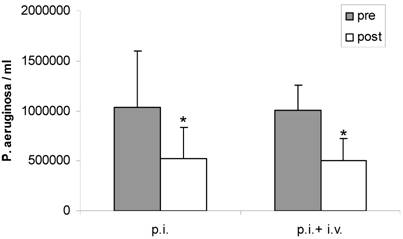 There were no significant changes in pO2, VC or FEV1 with inhalation alone or combined therapy (P > 0.05; data not shown). 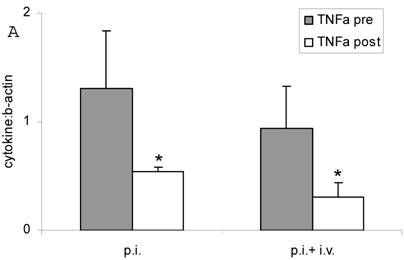 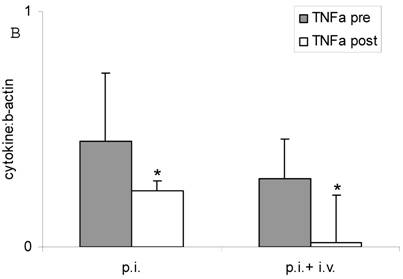 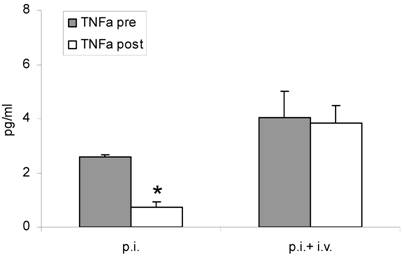 Fucose/galactose inhalation does not affect inflammatory markers and liver function

In the present study we found that inhalation with fucose/galactose could reduce P. aeruginosa and neutrophils in sputum as well as TNFα expression in sputum and peripheral blood of CF patients with acute exacerbation. Combination with intravenous antibiotics had no additional effect.

In our study we used fucose/galactose solution to block P. aeruginosa lectins PA-I and PA-II as an alternative approach to reduce airway colonisation with this bacteria. P. aeruginosa lectins PA-I and PA-II that bind to fucose and galactose contribute to the vilrulence of this bacterium (10). Therefore blocking of these lectins may prevent ongoing colonization and inflammation. Although fucose/galactose has been demonstrated to be effective in vitro and in vivo (6-8) at present there is no information available on the clinical effect of fucose/galacatose when given to CF patients.

In the present study both inhalation of fucose/galactose solution alone and combined therapy of inhalation and antibiotics decreased P. aeruginosa load in sputum. Previous studies used hypertonic saline solution or mannitol as inhalation treatment in CF (11-14). Inhalation with hypertonic saline solution resulted in improved lung function and reduced exacerbation rate (12, 13). There was also a trend towards decline of P. aeruginosa in sputum (12, 13). Inhalation with mannitol improved cough clearance in CF patients but its long-term effectiveness has not been determined yet (14). In the present study we cannot rule out the possibility that part of the effect may be due to hypertonicity. However, this does not preclude that fucose/galactose solution blocks P. aeruginosa lectins and that this is the most important effect. Of course an experimental control that inhaled another sugar that is not a strong binder to PA lectins would have been useful to further support the notion that the effect of fucose/galactose is due to restoration of the mucocilliary elevator and not due to hypertonicity. We did not include another control group because it has been clearly shown in previous experiments that fucose and galactose can prevent binding of PA lectins I and II (8, 15). In those studies inhibition of ciliary beats due to PA lectins was quantified as well as restoration by adding fucose and/or galactose (8, 15).

Inhalation alone but not combined therapy ameliorated inflammatory cell patterns in sputum (less neutrophils). This data are surprising. It seems that inhalation alone can clear bacteria from the airways without a strong inflammatory response due to physical elimination of P. aeruginosa via the mucociliary elevator. On the other hand it has to be taken into account that interaction of P. aeroginosa with antibotics is complex as “subinhibitory” concentrations of antibiotics leads to the suppression of lectin synthesis via the quorum sensing system (16). Antibiotics may therefore reduce the effectiveness of fucose/galactose. This remains to be further evaluated. On the other hand both treatment options significantly reduced TNFα mRNA expression in sputum cells and PBMC. This finding agrees with the hypothesis that antibiotic as well as inhalation therapy has an anti-inflammatory effect. Interestingly we only observed a significant reduction of TNFα serum protein levels with inhalation alone but not with combination therapy. It is tempting to speculate that fucose/galacatose inhalation may be able to clear bacteria from the lungs without inducing inflammation. However, this has to be further evaluated.

There was no significant increase in lung function measurements after inhalation or combined therapy. This is mostly due to the small number of patients and short period of time studied.

Of course the adequate control would have been inhalation with the diluting solution for fucose and galactose. However, this study was planned as a pilot study to see whether fucose/galactose would have any effect. Further studies are warranted to compare fucose/galacatose to other inhalations (eg hypertonic saline).

In conclusion the findings in this report show that inhalation with fucose/galactose solution could reduce P. aeruginosa in sputum of adult CF patients with chronic infection with this bacterium. It was well tolerated and no serious side effects were observed. Local inflammation in the lungs may be attenuated by removal of P. aeruginosa. Future studies will have to compare the effect of inhalation with fucose/galactose solution with other inhalation regimens. It will also be necessary to define which patients are likely to profit the most and whether it should be used in regular intervals or not.

The authors declare no conflict of interest. This study was registered at the University of Hamburg, Germany.