Osteogenesis imperfecta (OI) is generally caused by a dominant mutation in Collagen I, encoded by the genes COL1A1 and COL1A2. To date there is no satisfactory therapy for OI, but inactivation of the mutant allele through small interfering RNAs (siRNA) is a promising approach, as siRNAs targeting each allele of a polymorphism could be used for allele-specific silencing irrespective of the location of the actual mutations. In this study we examined the allele dependent effects of several tiled siRNAs targeting a region surrounding an exonic COL1A2 T/C polymorphism (rs1800222) in heterozygous primary human bone cells. Relative abundances of COL1A2 alleles were determined by cDNA sequencing and overall COL1A2 abundance was analyzed by quantitative PCR. One of the siRNAs decreased overall COL1A2 abundance by 71% of which 75% was due to silencing of the targeted T-allele. In conclusion, allele-preferential silencing of Collagen type I genes may be a future therapeutic approach for OI.

Osteogenesis imperfecta (OI) is a heterogeneous disease of the connective tissue with an incidence of approximately 1/10 000. The principal sign of OI is fragile bones with multiple fractures, but the disease can affect many other tissues as well. The mildest form of OI (type I) is often due to a null allele mutation (1), while severe and lethal forms (type II-VII) generally have a qualitative collagen defect (2). More than 90% of OI is caused by a dominant mutation in collagen type I, which is the most abundant protein in connective tissue. Approximately 90% of the organic matrix of bone consists of collagen I, where it provides both the framework for mineralization and the tensile strength that gives bone elasticity. Collagen I is comprised of two α1(I) chains and one α2(I) chain, encoded by the genes COL1A1 and COL1A2, respectively. The three monomers twist together in a zipper like fashion to create a triple helix which has a highly repetitive structure, (Gly-X-Y)n, with the glycine residue at every third position facing the confined space in the centre of the helix. The most common cause of OI is a mutation affecting a glycine residue.

To date, there is no satisfactory therapy for patients with OI. Many patients are treated with bisphosphonates, which there is some support for in some clinical trials (3). However, the results are insufficient and little is known about which patients benefit from this treatment and which do not. It is not known if treatment with other osteoporosis drugs would be a better alternative or would potentially complement the bisphosponate treatment in patients with OI. Considering mutations in severe OI act in a dominant fashion, a therapeutic vision is to convert a severe OI type to a type I OI by silencing the mutated allele. For COL1A1, this would convert a severe phenotype to a mild OI type I, while individuals who are heterozygous for null mutations in COL1A2 are phenotypically normal (4). One attractive avenue is allele specific silencing through RNA interference (RNAi), which in contrast to other methods of manipulation has a high and specific inhibition (5).

RNA interference is the process by which double stranded exogenous RNA elicit degradation of cellular RNA with sequence complementary to one of the strands. Following findings that antisense RNA decreased abundance of complementary mRNA (6) and later discoveries by Fire et al. (7), RNA interference has been developed into an extensively used method to decrease the abundance of specific genes. In 1999, small interfering RNAs (siRNAs) were discovered as endogenous molecules mediating RNA interference in plants (8) and in 2001 it was shown that exogenous double stranded siRNAs efficiently reduced mRNA levels in animal cells in vitro (9). Since these seminal discoveries, the siRNA technology has been further developed and siRNAs are now invaluable as they enable partial gene knockout in vitro as well as in vivo (10).

Recent studies have reported successful allele specific gene silencing by siRNAs able to discriminate between single nucleotide variants within mRNAs (11-13). These studies suggest that siRNAs may be interesting to explore as therapeutics in monogenic dominant disorders such as OI, where the dysfunctional allele could be targeted specifically. Indeed, allele-preferential suppression mediated by RNAi has been described in vitro for human COL1A1 allele constructs transfected into the primate kidney cell line COS-7 and for endogenous COL1A1 in human mesenchymal progenitor cells (14). Additionally, a splice-site mutated COL1A2 allele has been preferentially silenced in fibroblasts from a patient suffering from a type IV OI (15).

To date over 800 mutations have been described as causative of OI (2), making it labour intensive to design siRNAs for every separate mutation. In heterozygous individuals for a common polymorphism, siRNAs targeting each allele of COL1A2 as well as COL1A1 could be used for allele specific silencing irrespective of the location of the actual mutations. In this study we have examined the allele dependent effects of seven tiled siRNAs targeting a region surrounding an exonic COL1A2 SNP (rs1800222), for which the cells were heterozygous.

Seven tiled 21 nucleotide long siRNAs were designed. Each siRNA had antisense strands (AS) perfectly complementary to the T-allele of rs1800222 (Figure 1). siRNAs were purchased from Ambion as double stranded RNA molecules. Each strand of siRNAs had a two-basepair overhang in the 3'-end (always UU for sense strand) (Figure 1 illustrates the active antisense strand). Negative control siRNAs were purchased from Invitrogen and were: Stealth™ RNAi Negative controls (part numbers: NC1: 12935-200, NC2: 12935-112 and NC3: 12935-110).

Seven tiled siRNAs designed to target the region surrounding the T/C single nucleotide polymorphism (SNP) rs1800222 in the COL1A2 gene. Capital letters visualize 19 nucleotides of the antisense siRNA strand that are perfectly complementary to the T-allele of rs1800222. Each siRNA-strand had a two-nucleotide 3-prime overhang, which is visualized as non-capital letters in the antisense strands of siRNAs 1-7.

Primary cultures of bone derived cells from patients undergoing hip- and knee replacement surgery were genotyped for a C/T single nucleotide polymorphism (SNP) in exon 6 of COL1A2 (SNP ID rs1800222) (Allele frequencies: T=0.09 A=0.91). Cells from a heterozygous individual were transfected in 24-well cell plates using Magnet Assisted Transfection (MATRA) (Promokine, Germany). In the initial experiment 75,000 cells were seeded the day prior to transfection which was carried out using either 0.6µg of each siRNA, negative control siRNA, vehicle (only magnetic beads) or untreated control cells, with each treatment performed in duplicate wells. Transfected cells were incubated at 37°C in 5% CO2 until RNA was isolated at 48 hours post- transfection. In the subsequent experiment, 17,000 cells were seeded three days prior to transfection using 0.3µg, 0.45µg and 0.6µg of siRNA3 or negative control siRNAs (four wells per treatment). The cells were then incubated for 72 hours until RNA was prepared.

The software PeakPicker (17) was used to quantify ratios of the two COL1A2 alleles for all cDNA-samples Briefly, for each individual cDNA-sequence, SNP peak-heights were normalized for peak heights of adjacent non-polymorphic positions. For all treatments, allele ratios of the two SNPs rs1800222 and rs412777 were compared to peak-heights of negative control siRNAs.

To verify the successful delivery of small RNA, Cy3-labeled negative control siRNAs were transfected to primary bone cells at the same concentration as were used in the silencing experiments. Successful delivery to the target cells is shown in Figure 2, which depicts a fluorescence microscopy image capture of the Cy3-siRNA transfected cells 72 hours post-transfection.

From the silencing experiments using seven tiled siRNAs it was observed that siRNAs 3 and 4 were induced the highest degree of allele-preferential COL1A2 degradation (Figure 3). In a subsequent experiment cells were transfected with three different concentrations of siRNA3, which resulted in a substantial reduction in rs1800222 T/C allele ratio of mRNA in some of the transfected wells (Figure 4). The 0.3µg dose rendered a mean rs1800222 T/ C allele ratio of 33%, and the corresponding ratios for 0.45µg and 0.6µg were 0.30 and 0.35, respectively (Figure 5 A). These results were verified by cDNA sequence analysis of a heterozygous SNP in exon 25 (rs412777) where the allele ratios were 0.35, 0.38 and 0.41 for 0.3µg, 0.45µg and 0.6µg dosages of siRNA3, respectively (Figure 5A). Quantitative PCR analysis revealed that with increasing siRNA3 dosage, COL1A2 abundance was decreased by 71%, 77% and 82% (Figure 5B), of which 75%, 75% and 73% could be attributed to silencing of the targeted T-allele, respectively. 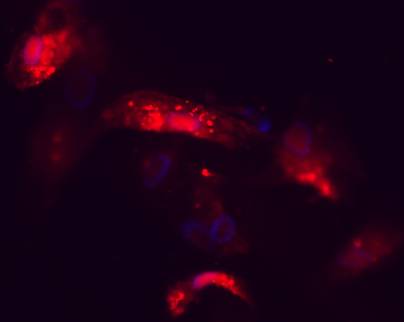 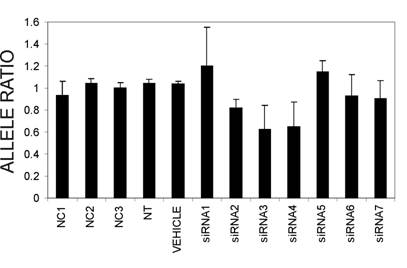 Chromatogram from sequencing of cDNA samples derived from RNA isolated 72h post-transfection with: (A) siRNA3. (B) Negative Control siRNA. 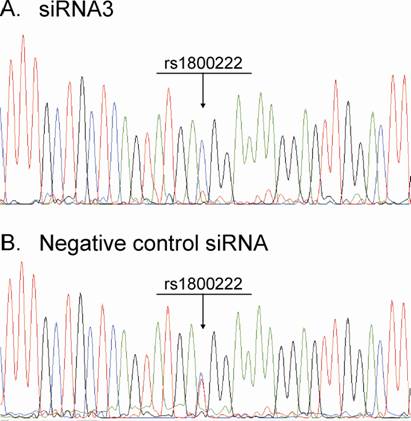 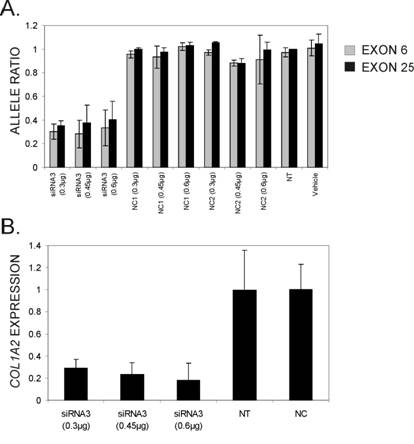 OI is a severe genetic disease with no existing effective or curative treatment. This study was aimed at exploring a genetic therapeutic approach for treating or limiting the severity of this disease. The principle of allele specific silencing of Collagen type I genes has been explored previously by Millington-Ward (14) who reported allele-preferential silencing of COL1A1 in COS7 cells and in primary human mesenchymal progenitor cells. The results reported by Millington-Ward can be regarded as proof of principle for the RNAi approach in OI treatment.

In this study we analyzed both alleles of COL1A2 simultaneously in primary bone cells from a single heterozygous individual and concluded that allele-preferential silencing is possible. Results revealed that the 0.3µg dose of siRNA3 was as specific for the T-allele as the 1.5x and 2x higher concentrations, while seemingly exhibiting less spill-over silencing of the C-allele, signifying that concentration is pivotal for allele specificity. Although the transfection efficiency was not determined we show that fluorescently labelled negative control siRNAs were delivered to the bone cells when cells were transfected with the highest siRNA concentration that was used in the silencing experiments. In future studies it will be necessary to determine the appropriate vehicle for efficient and specific delivery of the allele-preferential siRNAs to the intended target cells in vitro, and ultimately in vivo.

Several hurdles remain to be overcome before truly allele specific siRNAs, which render 50% overall silencing of the Collagen 1 alpha genes, can be tested in clinical trials. The efficiency and specificity of RNA interference using siRNAs is heavily dependent on the base composition of target sites in mRNA as well as on the siRNA sequences themselves. It will be necessary to analyze allele specificity and off-target effects of a large siRNA subset which target the full array of COL1A1 and COL1A2 polymorphisms for which the minor allele occurs in high enough frequencies. In addition to reducing target gene abundance, siRNAs are likely to also affect genes harbouring sequences partially complementary to the siRNAs, which will need to be further analyzed in order to exclude deleterious off-target effects. Another challenge will be to determine how to administer siRNAs specifically to the target cells in sufficient quantity. Recent studies have reported target tissue specific expression of siRNAs in mice as well as in non-human primates using viral vectors expressing short hairpin RNAs (shRNAs). Aptamer-shRNA chimaeras (18) may also be an interesting possibility to explore in order to deliver siRNAs specifically to certain cell types.

As a multitude of independent mutations (>800) have been described as causative of OI, it would be laborious to design separate allele specific siRNAs for each patient. We show that siRNAs differing for SNPs can be used to silence predominately one allele of COL1A2 in primary bone cells. The next step is to scan the full range of polymorphisms in the COL1A2 and COL1A1 and to design highly allele-specific siRNAs. By designing highly effective and specific siRNA pairs targeting each of two alleles of a particular SNP, rather than the actual mutation, the siRNA linked to the mutated allele could be used therapeutically in OI-patients heterozygous for this SNP. With a panel of siRNAs against common SNPs in the Collagen type I genes it would be possible to genotype the patient for common polymorphic positions and then advance with the most appropriate siRNA. As proof of principle, silencing of the T-allele of rs1800222 produced equally evident silencing when allele ratios were examined for a polymorphic position in exon 25 (rs 412777).

The results presented herein show that allele-preferential silencing of COL1A2 is possible in the desired target cells, and thus presents a framework for further efforts towards personalized RNAi therapy in OI.

We thank Anna-Lena Johansson for skilful technical assistance and Dr. Dominic Wright for his linguistic review. This work was supported by grants from the Swedish research council, project nr: 2007-2946.