Worldwide, cervical carcinoma is the second most frequent malignancy among women and the death rate is 8 per 100,000 [1]. Nearly half of patients present with stage I disease and about one third of patients treated with surgery received adjuvant treatment [2]. This adjuvant treatment is accompanied by considerable morbidity [3]. Therefore, it is important to make individualized treatment procedures in order to reduce negative side effects for patients with a good prognosis. Tumor diameter, pelvic lymph node metastasis, vascular invasion, deep stromal invasion and close resection margins are most often used to target adjuvant treatment to those patients with highest risk of relapse [4-7]. New molecular markers that improve the prediction of clinical outcome could be of considerable value to design individualized treatment procedures.

Receptor tyrosine kinases have important roles in the development and progression of human tumors [8]. Eph receptors represent the largest known family of receptors tyrosine kinases and are broadly divided into subclasses, EphA and EphB. The EphA receptors (A1-A9) bind to EphrinA ligands, a group of glycosyl phosphatidylinositol-linked membrane proteins and EphB receptors (B1-B6) interact with EphrinB ligands [9]. The normal function of EphA2 is not fully understood, but it is thought to function in the regulation of cell growth, angiogenesis, survival and migration [9-11]. EphA2 is overexpressed in a variety of human cancers, including breast [12], prostate [13, 14], oesophagus [15], renal [16], lung [17], pancreas [18] and ovarian [19, 20]. Furthermore, increase expression of both EphA2 and EphrinA-1 have been observed in vulvar carcinomas [21], cervical carcinomas [22], bladder carcinomas [23], oesophageal carcinomas [24], gastric carcinomas [25] and ovarian carcinomas [26]. In various human cancers poor outcome for the patients has been associated with increase expression of EphA2 and EphrinA-1 [16, 17, 19, 24, 26]. In our previous study of cervical carcinomas FIGO stage I-IV we found that increase expression of EphA2 and EphrinA-1 was significantly associated with shorter overall survival in multivariate analysis [22]. The prognostic significance of EphA2 and EphrinA-1 expression in early stage cervical carcinoma has to our knowledge not been examined.

The aims of our study were to investigate the expression of EphA2 and EphrinA-1 in a series of 217 early squamous cell cervical carcinomas and to identify predictive markers of the clinical outcome for these patients.

A retrospective study of 217 patients with clinical squamous cervical carcinomas FIGO stage IB, treated by radical hysterectomy and bilateral pelvic lymphadenectomy at The Norwegian Radium Hospital in the period January 1987 to December 1993, was performed. The median age at diagnosis was 39 years, ranging from 34 to 51 years. All patients were examined under general anesthesia and tumor diameter was assessed by inspection and palpation. Postoperatively, adjuvant treatment was given in case of large tumor diameter, lymph node metastasis, or invasion into the parametria. A median of 26 lymph nodes were removed. Radiotherapy was given to 32 patients, radiation and chemotherapy to 12, and another 31 received chemotherapy only. All patients were followed until death or July 2001. Forty-four (20.3%) patients suffered a relapse and 37 (17.1%) died of cervical cancer. Median follow-up for patients without relapse was 128 months (range from 112 to 146 months); for patients still alive, median follow-up was 129 months (range from 114 to 147).

Histological specimens were reevaluated blindly by an experienced pathologist (A. K. L.) for histopathological diagnosis according to the World Health Organization [27]. Table 1 provides a detailed description of the tumor characteristics. As controls, we used samples of 10 normal cervices from patients who underwent amputation of the cervix for prolapse (age range, 31-49 years, median age 43 years). The Regional Committee for Medical Research Ethics South of Norway (S-06381a), The Social- and Health Directorate (06/4509 and 06/4417) and The Data Inspectorate (06/01467-3) approved the study.

Ephrin A-1 and EphA2 immunostaining in relation to clinicopathological variables.

Numbers in parentheses are percentages.

Sections were immunostained using the Dako EnVisionTM + System, Peroxidase (DAB) (K4011, Dako Corporation, CA, U. S.A.) and Dakoautostainer. After microwaving in 10 mM citrate buffer pH 6.0 to unmask the epitopes the sections were treated with 0.03% hydrogen peroxide (H2O2) for 5 minutes to block endogenous peroxidase. Polyclonal rabbit antibodies EphA2 (sc-924, 1:400, 0.5μg IgG/ml) and EphrinA-1 (sc-911, 1:300, 0.7 μg IgG/ml) both from Santa Cruz Biotechnology Inc., CA, U.S.A. were applied on the sections for 30 minutes at room temperature followed by incubation with peroxidase labeled polymer conjugated to goat anti-rabbit for 30 minutes. The peroxidase reaction was developed using 3`3‑diaminobenzidine tetrahydrochloride (DAB) as chromogen. Human cervical carcinomas that had been shown to express EphA2 and EphrinA-1 have been included in all series as positive controls. Negative controls included substitution of the polyclonal antibody with normal rabbit IgG of the same concentration as the polyclonal antibody. All controls gave satisfactory results. The specificity of anti-EphA2 and anti-EphrinA-1 has been tested previously [26]. Cytoplasmic staining was considered positive. Four semiquantitative classes were used to describe the intensity of staining; no staining, weak staining, moderate staining and strong staining. Since tumor cells stained uniformly across the samples we did not considered the fraction of tumor cells with positive staining. Sections were scored by two independent observers (R. H. and Z. S.) without knowledge of clinical data. Conflicting results were reviewed until final agreement was achieved. Based on our previous published study of cervical carcinomas FIGO stage I-IV two different cutoffs were used [22]. EphA2 and EphrinA-1 expression were defined as high when strong staining was seen in the tumor cells or, alternatively, when strong/moderate staining was identified.

Pearson chi-square test with the Yates continuity correction for 2 x 2 tables or Fisher`s Exact test were used to test the association between the expressed proteins and between protein expression and clinicopathological parameters. Using the method described by Kaplan and Meier, disease-free and disease-specific survival curves were obtained from date of diagnosis to relapse or death, respectively, or to July 17, 2001. The log rank test with a test for trend in case of ordered variables was used for univariate and a Cox proportional hazards regression model was used for multivariate analysis of survival. In multivariate analysis, a backward stepwise regression with a P < 0.1 in the univariate analysis as the inclusion criterion was used. The hazard proportionality was verified by computing the log minus log against time. All calculations were performed using the SPSS 15.0 statistical software package (SPSS, Chicago, IL). Statistical significance was considered as P < 0.05.

Immunostaining results for EphA2 and Ephrin A-1. 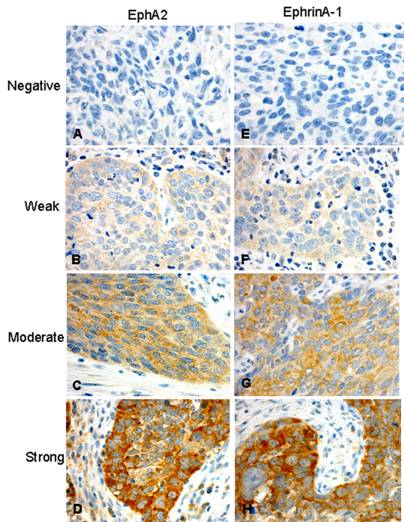 In previous reports [28, 29] protein expression of p27, p21, p16, cyclin A, cyclin E and cyclin D3 were studied with immunohistochemistry in the same patient populations. We therefore make a comparison between these proteins and EphA2 and EphrinA-1. There was a clear correlation between expression of EphA2 and EphrinA-1 (P < 0.0001). No other significant relationship concerning protein levels was found (Table 3).

In the univariate analysis high expression of EphrinA-1 (strong staining) was associated with poor disease-free (P = 0.033) (Figure 2) and disease-specific (P = 0.039) survival (Figure 3, Table 4). No significant correlation was obtained when using strong/moderate staining as cutoff for EphrinA-1 or strong and strong/moderate staining as cutoff for EphA2 expression. In the multivariate analyses EphrinA-1 was not an independent prognostic factor for disease-free (P = 0.139) and disease-specific (P = 0.222) survival.

*Correlation is significant at 0.01 level. 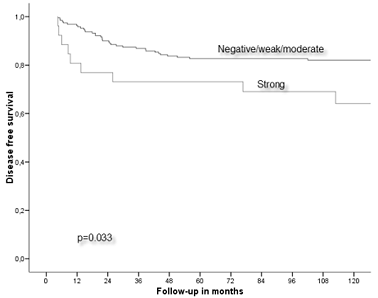 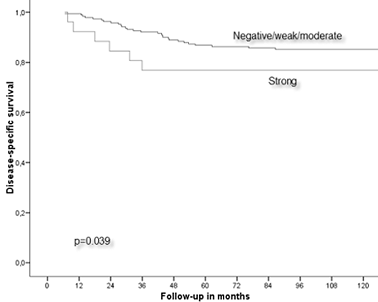 Our findings that EphrinA-1 overexpression tended to be associated with large tumor size and deep invasion are consistent with a recent report by Holm et al. [21] in vulvar carcinoma. However, in oesophagus cancer [24] and gastric cancer [25] EphrinA-1 expression did not correlate with tumor size.

Previously, EphA2 and EphrinA-1 have been found to be regulated by p53, p63 and p73 in non-small cell lung carcinoma cell line and breast adenocarcinoma cell line [31]. In contrast, there was no correlation between EphA2 or EphrinA-1 and p53 in vulvar cancer [21]. However, EphA2 overexpression has been found to be associated with high cyclin A level, whereas, increase expression of EphrinA-1 correlated with high cyclin A and p21 levels in vulvar cancer [21]. We did not identify any correlation between EphA2 or EphrinA-1 and the cell cycle proteins p21, p27, p16, cyclin A, cyclin E and cyclin D3 in early squamous cell cervical carcinomas. These studies may indicate that the mechanisms of expression EphA2 and EphrinA-1 are different in various types of cancers.

In conclusion, the increased levels of EphA2 and EphrinA-1 in a relative high number of early stage squamous cell carcinomas suggested that these two proteins may play an important role in the development of a subset of early cervical cancers. However, EphA2 and EphrinA-1 were not independently associated with clinical outcome.

We thank Mai Thi Phuong Nguyen, Liv Inger Håseth and Ellen Hellesylt for excellent technical assistance. This study was supported in part by grant from the Norwegian Cancer Society.

5. Inoue T, Okumura M. Prognostic significance of parametrial extension in patients with cervical carcinoma Stages IB, IIA, and IIB. A study of 628 cases treated by radical hysterectomy and lymphadenectomy with or without postoperative irradiation. Cancer. 1984;54:1714-9