Pleomorphic adenomas can display a variety of histopathological features, such as myxomatous changes, cartilage and bone formation in so-called stromal tissue of the neoplasms. According to the World Health Organization, pleomorphic adenoma is a tumor of variable capsulation, characterized microscopically by architectural rather than cellular pleomorphism. Epithelial and modified myoepithelial elements intermingle most commonly with tissue of mucoid, myxoid or chondroid appearance [1]. We believe that a “modified myoepithelial element” (neoplastic myoepithelium) may play an important role in these histopathological changes. There have been few case reports of pleomorphic adenoma with typical bone tissue formation [2, 3, 4], or examinations of the origin of the bone forming cells, using immunohistochemistry and electron microscopy. Recently, we experienced a case of pleomorphic adenoma with large typical bone formation [5], and in this paper we examined the case using immunohistochemical techniques to study the origin of the bone forming cells (osteoblasts and osteocytes).

The patient, a 34-year old Japanese male noticed a swelling at the region of his chin approximately 1 year ago. The patient was referred to a dental clinic, where initial examination revealed a small painless nodular swelling, soybean in size, of the chin with normal surface epithelium. The patient was prescribed antibiotics and analgesics, but these did not relieve his symptoms. Based on the subsequent clinical course, a clinical preoperative diagnosis of fibroma was made. Surgical enucleation of the lesion was performed under local anesthesia. Post-operative local healing was uneventful.

Immediately after surgical removal, from the patient, the materials were fixed in 10 % neutral buffered formalin fixative solution. The materials were then dehydrated by passage through a series of ethanol and embedded in paraffin. After sectioning, the specimens were examined histopathologically (hematoxylin-eosin: HE) and by immunohistochemistry (IHC). Immunohistochemical examination was carried out using DAKO EnVisionTM+Kit-K4006 (Dako Cytomation, Copenhagen, Denmark) and 2 monoclonal antibodies: S-100 (NCL-S100p; Novo, Newcastle, UK), Runx2 (M70: sc-107589; Santa Cruz Biotechnology Inc, Santa Cruz, California, USA). DAB was applied for the visualization of immunohistochemical activity. We included immunohistochemical staining using PBS in place of the primary antibody as a negative control.

The resected material, 8 x 6 x 6mm in size, was completely circumscribed with a fibrous capsule [Fig 1 (1)]. Tumor tissue was composed of proliferating tumor nests in the fibrous tissues. In the center of the tumor mass, there were some enlarged cystic lumens. The proliferating neoplastic cells consisted of ductal cells, sometimes showing formation of lumens, and modified myoepithelial cells, appearing in the outer layer. Some lumens had eosinophilic material [Fig 1 (2)]. In the area of so-called stromal tissue, spindle-shaped cells proliferated in close or in coarse, and myxomatous lesions were observed. Furthermore, spindle-shaped and oval-shaped neoplastic cells proliferated in the so-called stromal tissues [Fig 1 (3)].

Bone formation was observed in the area near the fibrous capsule. The bone had marrow-like tissue in the center of the bone tissue mass. The bone tissue was composed primarily of compact bone. The osteoblasts were typically arranged in the outer surface of the bone tissue. In contrast, on the side of marrow-like tissue, arrangements of both osteoblasts and osteoclasts were observed [Fig 1 (4)]. In some instances, there were remodeling lines which were deeply stained with hematoxylin.

Immunohistochemically, S-100 protein-positive products were detected in the cytoplasm of modified neoplastic cells in the neoplastic cell nests. Spindle-shaped or oval-shaped modified neoplastic myoepithelial cells, in the so-called stromal tissue, reacted positively to S-100 protein [Fig 1 (5)]. The S-100 positive cells coarsely proliferated in most stromal tissues, close to the bone tissues. Furthermore, the S-100 positive products were detected in the cytoplasm of some osteoblasts and osteocytes [Fig 1 (6)]. The osteoblasts and osteocytes were both positive to Runx2 [Fig 1 (7)].

In addition, the bone tissue formed in the pleomorphic adenoma, revealed reversal line indicated by deeply-stained hematoxylin structure with osteoclasts and osteoblasts. This finding suggests that bone formation occurred over a long period of time.

In conclusion, our present study morphologically confirms that the origin of the bone forming cells in this case of pleomorphic adenoma was modified neoplastic myoepithelial cells. This finding strongly suggested that the trans-differentiation took place between the epithelial and mesemchymal tissues.

(1) Tumor tissue is completely circumscribed with a fibrous capsule (HE, x 10). (2) The proliferat­ing neoplastic cells consisted of ductal cells, sometimes showing formation of luminal formation with or with­out eosinophilic mate­rial (HE, x 30). (3) Spin­dle-shaped and oval-shaped neoplastic cells proliferating in so-called stromal tissues (HE, x 50). (4) Bone formation is observed in the tumor tissue. The bone has marrow-like tissue in the center of the bone tissue mass (HE, x 100). (5) S-100 positive products are detected in the neoplas­tic cells. Spindle-shaped or oval-shaped modified neoplastic myoepithe­lial cells react positively to S-100 protein (IHC, S-100, x50). (6) In some cases, S-100 positive products were detected in the cytoplasm of osteoblasts (IHC, S-100, x50). (7) The osteoblasts and osteo­cytes are both positive to Runx2 (IHC, Runx2, x50). 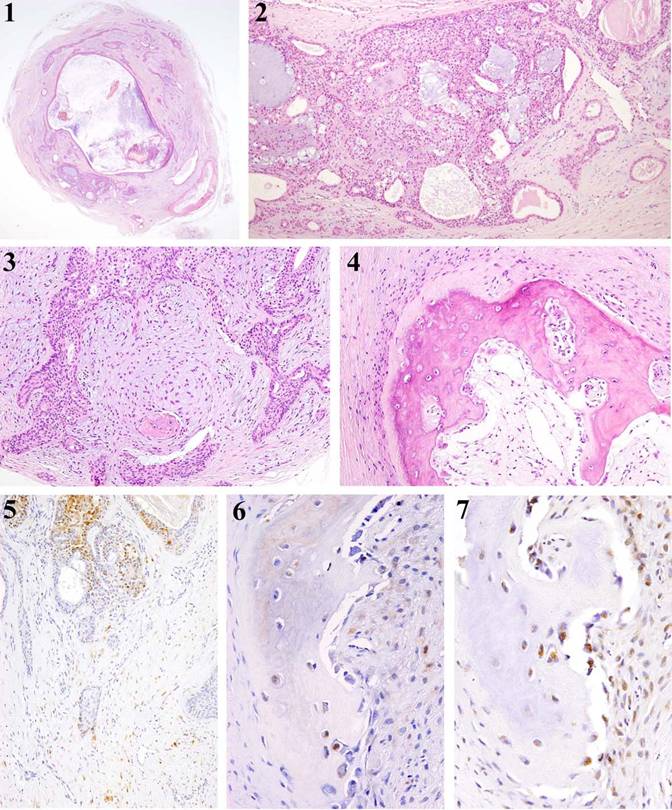