Recent studies have suggested that Helicobacter pylori (H. pylori) infection might be a risk factor for atherosclerosis. Since the bacterium has not been isolated from atherosclerotic lesions, a direct role in atherogenesis is not plausible. We examined associations of plasma total homocysteine (tHcy) and serum folate, independent risk factors for atherosclerosis, with H. pylori infection and subsequent gastric atrophy among 174 patients (78 males and 96 females) aged 20 to 73 years, who visited an H. pylori eradication clinic of Nagoya University from July 2004 to October 2005. Polymorphism genotyping was conducted for methylenetetrahydrofolate reductase (MTHFR) C677T and thymidylate synthase (TS) 28-bp tandem repeats by PCR with confronting two-pair primers and PCR, respectively. H. pylori infection and gastric atrophy were not significantly associated with hyperhomocysteinemia (tHcy ≥ 12 nmol/ml), when adjusted by sex, age, smoking, alcohol, and genotypes of MTHFR and TS. The adjusted odds ratio of gastric atrophy for low folate level (≤ 4mg/ml) was 0.21 (95% confidence interval = 0.05-0.78). The associations of tHcy with serum folate and MTHFR genotype were clearly observed in this dataset. The present study demonstrated that folate and MTHFR genotype were the deterministic factors of plasma tHcy, but not H. pylori infection and subsequent gastric atrophy, indicating that even if H. pylori infection influences the risk of atherosclerosis, the influence may not be through the elevation of homocysteine.

Several epidemiologic studies have shown associations between persistent gastric infection with Helicobacter pylori and ischemic disorders [1-4]. The ischemic diseases are also associated with plasma total homocysteine (tHcy) level [5-7]. Hyperhomocysteinemia, usually defined as a plasma homocysteine level greater than 15 nmol/ml, has been found in 5% to 10% of general populations [8, 9], and as high as 30% of the population aged 65 and older in the Framingham Heart Study (tHcy > 14 nmol/ml) [10]. Increasing tHcy concentrations accelerate cardiovascular diseases by promoting vascular inflammation, endothelial dysfunction, and hypercoagulability [11].

An important metabolic pathway for homocysteine is the remethylation cycle; in this reaction homocysteine is converted into methionine by methionine synthase. The folic acid–methionine pathway is particularly relevant to the control of genome stability, and involves a number of critical enzymes for which several polymorphisms have been identified. The activity of methylenetetrahydrofolate reductase (MTHFR) can be reduced by polymorphisms of MTHFR that alter its affinity for the substrate or cofactor [12]. There were several studies on the association between hyperhomocysteinemia and H. pylori infection, but the results were inconsistent [1, 2, 13-16].

Thymidylate synthase (TS) gene encodes the enzyme that catalyzes the conversion of deoxyuridylate to thymidylate. The enzyme expression is reportedly affected by a 28bp tandem repeat polymorphism. The 3R3R homozygotes increased tHcy in a Chinese population, possibly because TS and MTHFR compete for limiting supplies of folate, which is required for the remethylation of homocysteine [17]. However, another study showed that the tHcy concentrations for 3R3R homozygotes did not differ significantly from those for 2R2R homozygotes or 2R3R heterozygotes in healthy young subjects [18]. 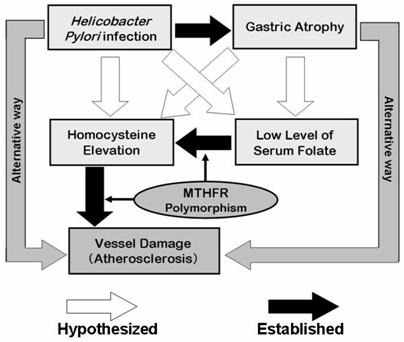 Correlation between serum folate and plasma total homocysteine according to MTHFR C677T genotype among those with serum folate < 8.0 ng/ml 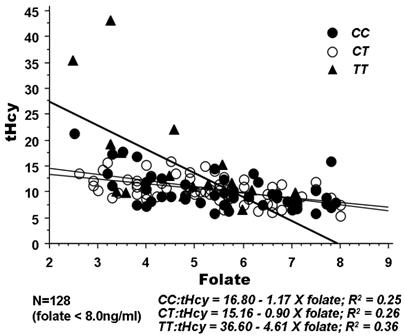 Subjects were patients who visited Daiko Medical Center of Nagoya University in Nagoya Japan for H. pylori infection tests and subsequent eradication treatment, from July 2004 to October 2005. Those aged 20 to 75 years were enrolled after the informed consent on polymorphism genotyping. Participants who had smoked less than 100 cigarettes in their lifetime were categorized as never smokers, and all others were categorized as ever smokers. Participants who had drunk alcoholic beverages at least once a week were categorized as “Yes”, and the rest were as “No”. When the subjects were positive for serology and/or urea breath test, they were classified into positive for H. pylori infection. Gastric atrophy was assessed with serum pepsinogens (PGI < 70ng/dl and PGI/II < 3). Blood samples were collected for measurement of plasma tHcy and serum folate. We defined tHcy levels of 12 nmol/ml and more as hyperhomocysteinemia, and folate levels of 4 mg/dl and lower as lower serum folate based on the frequency distribution (the highest and lowest quartile, respectively).

Differences in age, sex, smoking status, alcohol consumption, concentration of serum folate and tHcy, and genotype frequencies between the positives and the negatives of H. pylori infection and gastric atrophy were examined by a Mann-Whitney U test or chi-square test. Sex-age-adjusted odds ratio (OR), 95% confidence interval (CI), and interaction term of hyperhomocysteinemia and lower serum folate were estimated with an unconditional logistic model. All statistics were calculated by the computer program StatView Version 5 (SAS Institute Inc.). Hardy-Weinberg equilibrium was also examined.

The characteristics of patients according to H. pylori infection and gastric atrophy are shown in Table 1. Age was significantly associated with H. pylori infection and gastric atrophy. There were no significant differences in sex, smoking status and drinking status between the groups compared. The frequencies of MTHFR and TS genotypes were similar between the positives and the negatives. The observed frequencies of the two polymorphisms did not deviate from Hardy-Weinberg equilibrium (p=0.10 for MTHFR and p= 0.59 for TS).

Characteristics according to H. pylori infection and gastric atrophy

There was a strong association between plasma tHcy and the MTHFR genotype. Concentration of tHcy was significantly higher for TT genotype (13.9±9.4 nmol/ml) than for CC/CT genotype (9.7±2.9 nmol/ml) (p<0.0001). The other factors elevating tHcy level were males and ever smokers. The factors reducing serum folate level were males, ever smokers and drinkers. As the concentration of folate became lower, the difference in elevation of the tHcy concentration due to MTHFR polymorphism became larger. The MTHFR genotype had the strongest influence on the elevation of tHcy concentration among the factors examined. Figure 2 shows the correlation between folate and tHcy among those with folate < 8.0ng/ml. The slope of the regression line was steepest for those with TT genotype (slope = -4.61). Those with folate ≥ 8.0ng/ml had stable tHcy levels.

No significant differences in concentrations of serum folate and tHcy were found between the positives and the negatives of H. pylori infection and gastric atrophy according to the genotypes of MTHFR and TS in any subgroups defined by the genotypes (Table 2).

Table 3 shows the ORs and 95% CIs of hyperhomocysteinemia (≥ 12 nmol/ml), adjusted for age, sex, and the factors listed in the Table. The OR was above unity for H. pylori infection and below unity for gastric atrophy, through not significant. The OR of genotype of MTHFR was not significant in the multivariate analysis for hyperhomocysteinemia. Table 4 shows the ORs and 95% CIs for folate ≤ 4 mg/ml, adjusted for the same factors. Gastric atrophy decreased a risk of lower serum folate (adjusted OR=0.21, 95% CI, 0.05-0.78). Smoking status was a significant factor of lower serum folate.

Odds ratio (OR) and 95% confidence interval (95% CI) of hyperhomocysteinemia (≥ 12 n mol/ml), adjusted for age, sex, and the factors listed

Hyperhomocysteinemia is a well-established independent risk factor for the development of atherosclerosis-related diseases due to vascular endothelial damage and hypercoagulability. Some studies demonstrated an association between H. pylori infection and hyperhomocysteinemia [1-4], while the other studies did not. [15, 16, 21-23]. Our study taking into the genotypes of folate metabolizing enzymes did not indicate the association.

A number of studies on the possible H. pylori involvement for coronary heart disease have been published with conflicting results [24, 25], but a meta-analysis reported no strong association between H. pylori infection and ischemic heart disease in 1988 [26]. Recent reports consistently revealed the association between Cag A-positive H. pylori and vascular risk [27, 28]. On the other hand, there were many reports of positive associations of stroke and carotid artery disease with H. pylori infection. In addition, there was a strong association in subgroup analysis of patients with different etiologies of cerebral ischemia [29-31].

Epidemiologic studies have shown that homocysteine is associated with sex, age, smoking status and drinking status [8]. In Japan, Moriyama et al reported that age-adjusted plasma homocysteine levels were higher for both men and women with the TT genotype than those with CC or CT genotype in their cross-sectional study [32]. Casas et al searched for all relevant studies on the association between homocysteine concentration and MTHFR polymorphism, and reported that homocysteine concentration between TT and CC homozygotes was 1.93 µmol/L and the odds ratio for stroke was 1.26 (95% CI, 1.14 to 1.40) for TT versus CC homozygotes [33]. A meta-analysis reported that ischemic stroke risk increased with increasing MTHFR 677T allele dose, suggesting an influence of this polymorphism as a genetic stroke risk factor [34]. But another recent meta-analysis reported that no strong evidence existed to support an association heart disease in Europe, North America, or Australia [35]. Devlin et al reported that the affection of MTHFR polymorphism to hyperhomocysteinemia was significantly strong in lower folate level [36]. Our result supported that the MTHFR C677T polymorphism was associated with homocysteine concentration, and persons with TT genotype trended to be a hyperhomocysteinemia in lower folate level (Figure 2). It is important to include this factor for evaluation of the association between H. pylori infection and homocysteine.

The first step was well established [37]; our study also showed a very strong association between gastric atrophy and H. pylori infection. In the second step, there were few reports demonstrated that gastric atrophy blocked the absorption of folate. Gastric atrophy causes an increase in gastric pH and a decrease in ascorbic acid; the two mechanisms may cause a reduction in folate absorption [38, 39]. In the present study, gastric atrophy decreased a risk of lower folate opposite to what we expected. There were no other factors available for the adjustment, so the reason for this significant association was unknown. Anyway, gastric atrophy may not increase a risk of lower folate. H. pylori infection was not significantly associated with lower folate level and hyperhomocysteinemia.

The last step was demonstrated by several studies. Markedly elevated homocysteine concentration have been observed in patients with nutritional deficiencies of the essential cofactor vitamin B12 and the cosubstrate folate [40, 41]. But these are negative reports for subjects with high folate levels [1, 10]. Our present study showed that TT genotype of MTHFR trended to have hyperhomocysteinemia in lower folate level, and tHcy was low among those with high folate level independently on the genotypes.

The authors are grateful to Ms. Mio Kurata and Ms. Yoko Mitsuda for their technical assistance. This work was supported in part by a Grant-in-Aid for Scientific Research on Special Priority Areas of Cancer from the Ministry of Education, Culture, Sports, Science and Technology of Japan.

4. Kutluana U, Simsek I, Akarsu M. et al. Is there a possible relation between atrophic gastritis and premature atherosclerosis?. Helicobacter. 2005;10:623-9